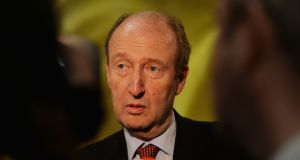 Minister for Transport Shane Ross: ‘I am absolutely determined that anybody over the legal limit shall face a disqualification.’ Photograph: Alan Betson

Minister for Transport Shane Ross has criticised TDs “shamelessly’’ succumbing to pressure to oppose his planned reversal of a loophole allowing first-time drink-driving offenders to escape disqualification. “It is very regrettable,’’ he said.

The Vintners’ Federation of Ireland (VFI), which has 4,500 members, has written to TDs and Senators urging them to oppose the measure. Some vintners are organising meetings with their local Oireachtas representatives as part of their campaign.

Mr Ross told The Irish Times he intends to press ahead with his proposed Bill, which provides for an automatic disqualification for first offenders. “I am absolutely determined that anybody over the legal limit shall face a disqualification,’’ he said. “The carnage on the roads has been absolutely appalling in the past two years.’’

Mr Ross’s proposal, which has been approved in principle by the Cabinet, would abolish the provision whereby drivers with an alcohol limit of between 50mg and 80mg per 100ml receive three penalty points and a €200 fine if it is their first offence. This was introduced by the then minister for the environment Noel Dempsey in 2009.

Mr Ross said there would be no change in the alcohol levels already in place but an automatic driving ban would also apply. “It is simply to provide for an automatic disqualification if you are over a certain limit,’’ he added.

Mr Ross said he was aware vintners were lobbying against the measure because they were not particularly anxious to see a loophole in the law closed. “We are interested in safety and saving lives,’’ said Mr Ross. “And this will save lives.’’ He said there was plenty of evidence to show many people linked to road fatalities were in the 50mg to 80mg bracket.

VFI president Pat Crotty said, apart from writing to TDs and Senators, no national campaign had been organised by the organisation’s headquarters. “Members locally have been meeting their public representatives,’’ he said. “We will decide nationally what we will do when the legislation comes before the Dáil.’’

Mr Crotty, a Kilkenny publican, said Mr Ross was effectively making a “zero tolerance’’ proposal. “That is not the way to bring people along the road with you,’’ he added. He said the Minister’s proposal would penalise “social drinkers’’, adding the VFI and its members did not condone drink-driving.

He said the focus should be on drivers who had blood alcohol levels that were twice the limit and caused 80 per cent of deaths. “There is a problem regarding road safety, but I believe existing measures tackling drink-driving are adequate,’’ Mr Crotty added.

Mr McGrath said the proposed change in the law was “a naked attack on rural Ireland’’ by unelected officials. “We have lost Garda stations and post offices, and this proposal would be another blow,’’ he added. “We do not have buses, Dart and Luas like in the city.’’

Mr Ross is scheduled to meet local vintners in Listowel on Tuesday during a visit to the Kerry constituency. The meeting has been arranged by Independent TD Michael Healy-Rae who is opposed to the proposed Bill.

Dublin Mid-West Sinn Féin TD Eoin Ó Broin has supported Mr Ross and gave a strongly-worded response on social media to the VFI letter seeking support. “I am deeply disappointed by the content of your e-mail and your ongoing opposition to Government proposals which will undoubtedly save lives,’’ he said. “As a politician who works with families devastated by the actions of drink-drivers, I am very clear in my support for the Minister’s particular measure.’’

Last month, Fianna Fáil transport spokesman Robert Troy criticised the proposed Bill and accused Mr Ross of being lazy. Mr Troy said there was nothing to suggest such a road-safety measure would be effective or save lives.

“There are many proposals that Mr Ross should be focused on, including restoring the traffic corps to the level of 2010 and ensuring adequate enforcement of current legislation,’’ he added.

1 All students will not return to school even if social distancing rules are relaxed – McHugh
2 Trump announces clampdown on social media companies
3 Miriam Lord: Taoiseach is trapped in a Zoom session from hell
4 Maria Bailey takes action against newspaper over ‘swing gate’ coverage
5 What exactly will happen in phase two of easing restrictions?
Real news has value SUBSCRIBE