Political leadership needed to inject life into the peace process

Do our current leaders have the same skills as those who helped secure the Belfast Agreement? 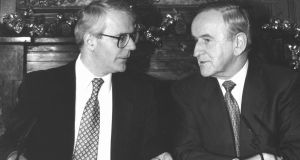 It’s hard to believe that 20 years have gone by. Looking back I think about the leadership qualities of those involved who helped us get to the point where an agreement was possible. Those leadership qualities that always make history are apparent leading up to the agreement, and are what we need today to inject new life into the peace process.

How did we get there? When we think about that week in 1998 we can often forget that the Belfast Agreement was actually more than a decade in the making.

Since 1969, successive leaders had attempted to resolve the escalating violence in Northern Ireland.

The Sunningdale Agreement in 1974, which introduced the concept of power-sharing as well as established North-South bodies, and the Anglo-Irish Agreement in 1985 gave the Irish government a formal role in Northern Ireland. Each agreement helped create the conditions for others to follow, and build on the ideas put forward.

The leadership of John Major and Albert Reynolds in 1993, issuing the Downing Street Declaration with its emphasis on the principle of consent for Northern Ireland and the two governments working together to bring an end to violence, was a critical moment on our journey towards finding a solution. Indeed, the language used in this declaration is one still in use by the two governments to this day.

With a small majority in the House of Commons and domestic political difficulties within the Conservative Party, it would have been easy for Major to have put Northern Ireland in the “too hard to deal with” basket and merely left us to muddle on.

Likewise, Albert Reynolds, who before he became taoiseach had made no substantive statements on the Troubles and had major economic issues to deal with, made resolving the conflict a priority for his government.

Indeed, neither leader received any electoral credit for their work on Northern Ireland. In the early 1990s the risks were great and the chances of success were not guaranteed. Yet through their leadership progress was made.

At a time when things looked bleak and the cycle of violence seemed to be something that had grown a part of daily life in Northern Ireland, there was a serious attempt to provide a circuit breaker.

In the late 1980s, SDLP Leader John Hume began a process of directly engaging with Sinn Féin president Gerry Adams in a bid to bring an end to violence and create a viable political process.

In recent years Hume has received many plaudits for his work in these years but it is worth remembering that he received a lot of serious criticism for his approach. Critics such as columnist Conor Cruise O’Brien wrote in 1994 that it was time for Hume to resign as SDLP leader, criticising his talks with Sinn Féin. Hume also had his fair share of detractors within his own party.

Yet while others were losing their heads, Hume kept his. Keeping his eye on the main prize of ending violence, he pledged to persevere, arguing that “our humanity transcends our identity”.

These series of talks between the two leaders helped secure a route for Sinn Féin into the mainstream of democratic life in Ireland, and by putting his country before his party Hume can rightly take pride in his work of laying the foundations for the agreement secured in 1998.

Thinking back at the challenges facing those above it must have been a daunting prospect trying to get all these different actors into a space that made an agreement possible.

It took courage, risks and compromise from all sides to make it work, and I look at the state of Northern Ireland politics today and wonder do our current leaders have the same skills as those who helped secure this achievement?

Previous leaders such as Martin McGuinness and Ian Paisley, who in later years helped bring things together, are now gone. What is demonstrated by their absence is that leadership matters to a process. Taking your party into government with a sworn enemy or shaking hands with a British monarch are important acts of leadership.

The efforts of previous governments to make the time and put in the extra effort to get agreements over the line in the way Tony Blair and Bertie Ahern did matters in keeping the momentum going.

Do we have that type of leadership today, I wonder? I look around and see no shortage of ability but there are some questions that still need to be answered.

DUP leader Arlene Foster led her party to its best result at the 2017 general election, but can she make the necessary compromises to get an agreement over the line?

The new Sinn Féin leadership team of Mary Lou McDonald and Michelle O’Neill represent a generational change for that party, but can they demonstrate to the nationalist community that Stormont is fit for purpose?

Questions also remain for the two governments, Theresa May has the challenge of Brexit, but can she make Northern Ireland a priority for her government?

Can Leo Varadkar ensure that restoring an Executive doesn’t get drowned out in the heavy talks about Brexit, and resist those who want to undermine the basic tenets of the agreement in London.

On this anniversary it’s easy to look back and get disheartened. However, I am an optimist. The foundations laid 20 years ago are strong, but they need to be protected.

Leadership matters, risks will have to be taken and outcomes will be uncertain. But history never remembers those who didn’t even try, and on this anniversary that’s something our current generation of leaders need to keep in mind. David McCann is the deputy editor of Slugger O’Toole