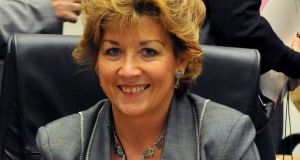 Geraldine Byrne-Nason: “There we were, the Norwegian ambassador, myself and the Canadian foreign minister, standing outside the building as countries entered to vote”

Geraldine Byrne-Nason stood outside the United Nations building in Manhattan in New York as ambassadors arrived to decide on the 10 countries that would take up two-year seats at the UN Security Council table.

“There we were, the Norwegian ambassador, myself and the Canadian foreign minister, standing outside the building as countries entered to vote,” Ireland’s Ambassador to the United Nations recalls.

“It was like standing outside the polling stations at home – trying to gauge if people were looking at you differently when they come out after voting. There was good camaraderie,” she laughs, “Nonetheless it was serious stuff.”

Ireland was thought to have a good chance against Canada and Norway, but the required two-thirds majority on the first round was seen to be a stretch. However, 128 votes were secured, securing a place for two years beginning in January.

Byrne-Nason and colleagues watched the results unfold from their 2nd Avenue skyscraper office in mid-town Manhattan. Back in Dublin, Taoiseach Leo Varadkar and Tánaiste Simon Coveney did the same in Merrion Street, with Foreign Affairs doing the same in Iveagh House.

“I don’t think I even heard the announcement of the final vote as the room just erupted,” she recalls, “This is the highest ambition you can have when you serve as Ambassador to the UN – see your country take a seat at the Security Council table.”

Ireland’s bid for a seat has dominated her time in New York, where she arrived in 2017. Though Ireland had declared its candidacy in 2005, preparations stepped-up in 2018. Following that the pace was relentless.

“The United Nations is unique in that every single function is a working event. You can’t miss a national day reception, or turn down an invitation to a function,” she said. Each gathering requires meticulous preparation.

“My team briefs me on which ambassadors are going to be there, what issues are of interest to them at that particular moment. It means being on top of the issues that have happened that day and that may be of relevance to them.”

Byrne-Nason’s career began in 1981. In the mid-1980s she posted to the UN in New York as a junior diplomat. Later she spent eight years at the Organisation of Economic Co-Operation and Development (OECD) in Paris, before returning to Dublin.

She subsequently served as Ireland’s Permanent Representative to the European Union in Brussels. In 2011 she became second secretary general in the Department of the Taoiseach. Terms as ambassador to France and Monaco between 2014 and 2017 came before a return to the UN.

Originally from Drogheda, Byrne-Nason is proud of her roots, displaying a framed photograph of suffragettes marching through the town in the late 1890s presented to her by a Co Louth group visiting during St Patrick’s Day celebrations in New York.

She brought the picture to the United Nations in December 2018 as she introduced the late Eavan Boland, who had written a poem to mark 100 years since the extension of voting rights to Irish women.

“Eavan’s poem was titled Our Future will Become the Past of Other Women, and I thought that the image of these women, all dressed in white, walking through the streets of my home town in Ireland captured this theme perfectly.

“Here I was, from a small town in Ireland and now representing my country at the UN. It was down to women such as these who helped make women’s participation in public life possible,” she told The Irish Times.

During her tenure at the UN, Byrne-Nason has chaired the UN’s Commission on the Status of Women, highlighting the role women played in Northern Ireland peace-building, one that could be copied by women in Yemen, Syria, Lebanon, and elsewhere.

Preparations for January are already under way, and will intensify in early September. Ireland will become an official observer in October, permitted to sit in on meetings. The existing Irish diplomatic staff at the UN will jump from 12 “to about 23”, along with local staff.

“We know from other countries’ experiences that it is vital to have this level of staffing to be able to cover the ground,” she says. “It’s 20 years since we last sat on the council, so there is already lots of preparation work under way in Dublin.”

The agenda list is huge. Afghanistan and Yemen will most likely dominate; along with Israeli-Palestinian tensions, particularly if Israel moves ahead with plans to annex parts of the West Bank this year. And then there is the outcome of November’s US presidential election.

For Byrne-Nason, her first time sitting at the famous Security Council horseshoe table will mark a personal as well as professional achievement. Thirty years ago she sat outside that same room, waiting for “someone to come out with information”.