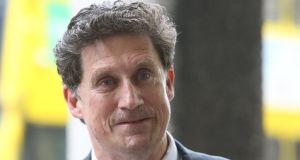 Green Party leader Eamon Ryan: engaged in intensive campaigning at the weekend to persuade membership to back the coalition programme. Photograph: Gareth Chaney/Collins

Fine Gael and Fianna Fáil are sharply divided on what to do if Green Party members reject the proposed coalition government deal between the three parties this week.

Sources in the parties expect a political crisis to arise if the programme for government is not endorsed by Green members this week, with a deadline for renewing the Offences Against the State Act on Tuesday, June 30th, looming.

The fate of the proposed coalition is likely to be decided on Monday with members of the three parties completing and posting their ballots. With Fine Gael and Fianna Fáil members expected to ratify it, Green leader Eamon Ryan was engaged in intensive campaigning over the weekend to persuade the membership to back the programme.

Opponents of the deal were also lobbying fiercely, with party sources on both sides predicting a tight result when the votes are counted on Friday. One Green TD said the vote was “on a knife edge” with a two-thirds majority needed if it is to be ratified.

“It’ll be decided in the next 24 hours,” Mr Ryan said on Sunday.

Several senior Fine Gael figures, including a number of Cabinet Ministers, told The Irish Times they would not form a government with Fianna Fáil and Independent TDs if the Green Party rejected the programme.

“We can’t put together a government with Independents. It’s this or nothing. People need to understand what our position is,” one Minister said.

Another Minister said they did not believe a Fianna Fáil-Fine Gael-Independent arrangement would result in “a sustainable government”.

Fianna Fáil sources say the party can form a government supported by or including Independents if the Greens do not endorse the deal, while some party sources also believe Labour can be persuaded to join the process if the Greens reject the proposal.

Some in Fine Gael spoke of a different “plan B”, which would see the Dáil asked to vote in Leo Varadkar as taoiseach on the understanding that it was only for the purpose of appointing 11 senators to complete the Seanad and allow the upper house to vote to renew the Offences Against the State Act before June 30th.

If both Houses of the Oireachtas have not voted to continue the Act by then, several anti-terror and anti-gangland provisions – including those underpinning the Special Criminal Court – will lapse.

There is, however, likely to be strong opposition to this idea in Fianna Fáil. It is understood the three party leaders have briefly discussed the eventuality, but have not agreed what to do if the deal is rejected.

Supporters and opponents of the deal in all three parties spent the weekend engaged in intensive campaigning. Mr Varadkar and Tánaiste Simon Coveney addressed an online Fine Gael event, urging delegates to back the deal, while Fianna Fáil TDs campaigned in their constituencies.

Fianna Fáil will break down the results by constituency, providing an incentive for TDs hopeful of ministerial promotions to secure strong backing for the deal in their area.

Mr Coveney acknowledged in Sunday night’s Fine Gael event that the 7 per cent reduction in carbon emissions would not be met in “the first few years”, but said the average annual reduction targets would be met over its lifetime. Mr Varadkar said most of these emissions reductions would happen in the second half of the decade.