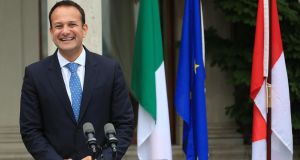 Taoiseach Leo Varadkar: said the Government acknowledged there was a concern about a massive hike in charges under the new waste charges system. Photograph: Colin Keegan, Collins Dublin

The Government is to set up a “pricing watchdog monitoring unit” to provide monthly reports on a new system of waste charges, Minister for Environment Denis Naughten told the Dáil.

He said he would ask the Competition and Consumer Protection Commission to report on the operation of the system.

“This will inform the future development of national waste management policy before year end, which will provide an evidence base to establish a regulator to prevent price gouging,’’ he added.

The Minister was speaking in the House after the coalition reached agreement with Fianna Fáil on a pay-by-weight regime for all householders and for a new regulator to monitor pricing in the industry.

Mr Naughten said a Government support of €75 per year would be introduced to assist persons with medical incontinence.

He added €9 million would be provided this year to support waste enforcement by local authorities.

He said 85 projects had been approved so far this year as part of an anti-dumping initiative, with a total of €1.3 million in funding available.

Mr Naughten said a new scheme would be introduced to manage end-of-life vehicles to prevent dumping.

The Minister was replying to a Fianna Fáil motion calling for the creation of an independent waste regulator. Party environment spokesman Timmy Dooley said Fianna Fáil’s motivation in moving the motion was to ensure hard-pressed houseowners would not be gouged in a free for all pricing arrangement.

“We believe the only fair and safe method of ensuring that this price gouging does not happen is through the introduction of a regulator,’’ he added.

Mr Dooley said his party accepted the need to reduce the amount of waste sent to landfill.

“I know of no community that wants another landfill in their area,’’ he added. “Doing this will require a multi-pronged approach,’’ he added.

Earlier, Taoiseach Leo Varadkar told the Dáil the Government had agreed to put in place a “watchdog” which would monitor charges under the new waste collection system.

“We do reserve the right as a Government to bring in price regulation if the industry hikes prices,’’ he added.

The Government has announced that it will introduce a pay for weight system for the 50 per cent of households who currently pay a flat fee in order to encourage waste reduction and recycling.

Mr Varadkar said the Government acknowledged there was a concern about a massive hike in charges under the new waste charges system.

“It is a legitimate fear people may have,’’ he added.

He said 50 per cent of the country had been on the system already and were used to it.

The system, he added, would change for the other 50 per cent of households and would be phased in over the next 15 months.

The Taoiseach was replying to Sinn Féin deputy leader Mary Lou McDonald who said citizens and families had been left to the mercy of private operators.

This was especially so in the case of those who produced higher than average waste because of age, disability or family size, he added.

Ms McDonald warned that waste collection charges would increase for many people who could not afford them. She said the Taoiseach seemed confident a “measly annual grant of €75 would make a difference”.