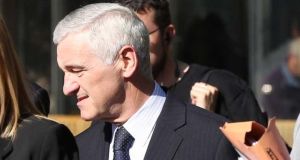 The Garda director of finance, Michael Culhane, did not disclose his knowledge of the Templemore irregularities to the Comptroller and Auditor General (C&AG).

Correspondence given to the Oireachtas Public Accounts Committee includes a letter from Mr Culhane to the office of the C&AG on July 7th, 2015, insisting he had made the office known of any matters that would impact the Garda financial accounts.

However, Mr Culhane had attended a meeting with head of human resources John Barrett a month previously, where the issues were discussed and Mr Culhane’s assistance was requested in uncovering the extent of the mismanagement at Templemore.

The director of finance had also been present at a meeting of the working group established within the force on July 2nd to examine the matter, five days before the letter was sent.

C&AG Séamus McCarthy has been critical of the decision by members of An Garda Síochána not to disclose financial mismanagement when they first arose.

Mr McCarthy told the PAC meeting this week any question marks over the appropriation account or the irregularity of any transactions should have been brought to his attention.

In a letter to the C&AGon July 7th, 2015, Mr Culhane wrote: “I also certify that in accordance with the code of ethics of the Institute of Chartered Accountants in Ireland, that I have and will disclose to the Comptroller and Auditor General any matters that would impact upon the regularity and audit opinion expressed in the appropriation accounts.”

houseCoopers to Mr Culhane, offering advice on how to resolve the complexities at Templemore. Included is a claim that surplus profit from the Garda restaurant at the college was used to invest in shares.

Mr MacSharry, who is a member of PAC, insisted he did not want to prejudice any ongoing investigations into the force but said it was clear there was a crisis of confidence in An Garda Síochána that required an immediate change in leadership. The TD added: “We need a clean sweep at the top. The commissioner and her colleagues either need to resign or the Government must intervene. The problems within the force are not confined to four people but there is change required at the helm to ensure confidence is restored.”

The PAC has completed its public hearings into financial irregularities at Templemore and will compile a report by the end of the month.

There is a series of documentation requested by the committee, which has yet to be submitted. Members have asked for the thread of emails exchanged between Mr Culhane and the Department of Justice in July 2015.

The Irish Times revealed correspondence between Mr Culhane seeking charitable status for Templemore from Revenue in an attempt to “muddy things up”.