Raymond McCord in court to challenge prorogation of UK parliament 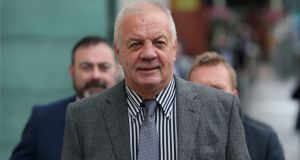 Victims’ campaigner Raymond McCord is back in Belfast court on Tuesday to challenge the prorogation of Parliament and a potential no-deal Brexit.

Mr McCord, whose son Raymond Jnr was murdered by loyalist paramilitaries in 1997, is already taking judicial review proceedings against the government to prevent a no-deal Brexit, claiming a disorderly exit would damage the peace process.

Proceedings at the High Court centred on the scheduling of a substantive hearing on those issues, with Mr Justice Bernard McCloskey stating that time constraints would make it impractical to hold a discrete interim hearing on the parliamentary suspension, before the full case was heard.

Judge McCloskey is to sit again on Wednesday afternoon to consider when the full case should be heard, making clear it would need to be brought forward from its current listing date of September 16th.

Proceedings on Tuesday were interrupted at their conclusion when Bangor man Chris Carter, who once unsuccessfully challenged Northern Ireland’s smoking ban, asked to address the court before going on to accuse those attempting to challenge prorogation of committing “high treason” against the Queen. – PA