Rape trials to be scrutinised by independent assessor 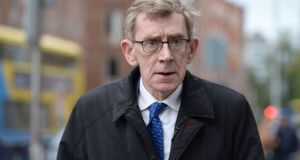 Lecturer in law at NUI Galway Tom O’Malley has been asked to assess the legal protection offered to complainants in sexual assault trials.

The Minister for Justice has appointed an independent person to examine all aspects of sexual assault trials.

Charlie Flanagan has asked lecturer in law at NUI Galway Tom O’Malley to conduct an examination of how cases are conducted in the Republic.

Mr Flanagan had earlier this year committed to review all aspects of how such trials are conducted and whether further protections should be offered to a victim of sexual assault.

It followed widespread protests in response to the acquittal of Ireland and Ulster players Paddy Jackson and Stuart Olding in the Belfast rape trial.

All four men in that trial were acquitted. Demonstrators demanded changes to the justice system in Northern Ireland and the Republic to assist victims of sexual assault.

The Irish Times understands Mr O’Malley has been asked to assess the legal protection offered to complainants, the practice of pre-recorded cross-examination for complainants, additional training for gardaí and members of the judiciary and the availability of special measures for vulnerable witnesses and accused persons.

Mr O’Malley is expected to report to the Minister in the coming months with a number of proposed changes.

Government sources said a lot of the work had begun within the Department of Justice and Mr O’Malley will be tasked with driving it forward.

Mr O’Malley has been a lecturer of law at NUI Galway for over 40 years. The Irish Times was unable to contact him yesterday.

Last year, Mr O’Malley appeared before the Oireachtas committee on the Eighth Amendment and outlined his belief that sexual offences legislation should be consolidated into one piece of law.

He has described the current situation “as a legislative maze, with countless amendments and substitutions rendering this important area of law anything but accessible”.

The Law Reform Commission is also conducting an examination of Ireland’s legislation in the area of rape and has asked for the public’s input in this area.