In Ballymena, shoppers are divided on Ian Paisley’s political future

Many say MP was wrong to accept Sri Lankan holiday, but would vote for him in byelection 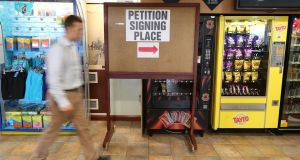 A petition has opened in Ballymoney, Ballycastle and Ballymena calling for a byelection in North Antrim after DUP MP Ian Paisley was suspended from the Commons for 30 days following his failure to register two family holidays paid for by the Sri Lankan government. Photograph: Niall Carson/PA Wire

Shoppers on Wednesday were sharply divided on the political future of Ian Paisley jnr, who has been suspended from the House of Commons for not declaring family holidays to Sri Lanka paid for by the Sri Lankan government.

A petition to force a byelection in the North Antrim constituency opened for signature yesterday. Under the Recall of MPs Act, just a 10th of the 75,000 registered voters have to sign it to force matters to a vote.

Voters have six weeks to add their signatures to the petition in Ballymena, Ballymoney and Ballycastle – though some grumble that 10 locations could have been opened throughout the constituency to collect names.

A self-described Paisley voter, but one who backs calls for a byelection, Thomas McGall, from Portglenone, said: “Maybe what he did was wrong and dishonest. It damages the DUP and the boiler business [the RHI heating scandal]was a terrible thing, too.”

Nevertheless, the pensioner will vote for Paisley jnr if a byelection is called, since he did not believe North Antrim would be better off with another MP. It would be “a pity to see Mr Paisley losing it”, he said.

Catherine McAlary (19) and Mary Boyle (20) from Ballymena were more forgiving: “I would have done the same [accept the Sri Lankan holiday] if I was him. It wasn’t really a big deal and he didn’t break the law,” said McAlary.

However, she did think that the Democratic Unionist MP might struggle if a byelection is forced. “People didn’t like him before this happened. I don’t feel it’s going to work out well for him, but I feel for him.”

Harry McGall (67) from Ballymena and his wife Anne believe a byelection is likely, but largely because nationalist voters in the constituency will sign the petition: “The man’s entitled to a holiday and who else are you going to get [as MP]?” he said.

Defending Paisley, Anne McGall contrasted his constituency work with the inactivity of Stormont Assembly members. “What about these MLAs in Belfast who haven’t sat for over a year?” she asked, “they’re getting paid and they use that money for going on holidays.”

There might be a reduced majority if a byelection does take place, but who’s going to run against him?

Businessman Irwin Armstrong, who owns a healthcare company in Ballymena, is a former political opponent of Mr Paisley, having stood on a joint Conservative/Ulster Unionist ticket in the 2010 General Election.

For him, the byelection is a futile exercise, the DUP and the Paisley family are too well entrenched: “I’m 67 and a Paisley has won every Westminster election since I was eligible to vote,” he noted.

Ian Paisley jnr inherited the North Antrim seat in 2010 from his father, Rev Ian Paisley. “There might be a reduced majority if a byelection does take place, but who’s going to run against him?

“If the DUP supports him, and I think that it will, it can call upon a massive infrastructure, with big, well-organised canvass teams, that it has built up over 48 years. None of the other parties can compete,” he went on.

“Paisley hasn’t committed a criminal offence but he broke Westminster’s rules and he should have known better,” Irwin continued, “I’m doubtful that the petition will reach the required threshold.”

Ulster Unionist leader Robin Swann, who represents North Antrim in the Assembly, has said he will sign the petition, but the UUP has not registered to campaign for a poll.

For now, the official position of the Democratic Unionist Party on the suspended MP is unknown, though few believe it will oppose him, actively or otherwise – even though he faces a party investigation.

Even so, there is considerable embarrassment that the inheritor of the Paisley mantle has faced the longest suspension on record from the House of Commons, plus being the first to face recall.

Nevertheless, Irwin Armstrong, in the heart of “Ballymena-hi”, is far from being alone in believing that little will change. It would, he said, simply add to the sense of disillusionment in Northern Ireland politics. If held, the byelection will be “a colossal waste of money”.