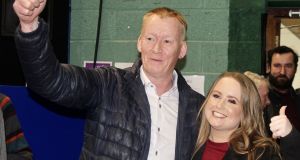 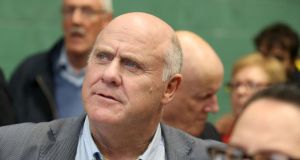 The big losers were Fine Gael and Fianna Fáil. Fine Gael lost a seat in the constituency with junior minister Sean Kyne the casualty.

Fianna Fáil’s attempts to win a second seat were confounded by a poor vote nationally.

Mr Grealish’s controversial remarks about African migrants being “spongers” would appear to have helped rather than hindered his campaign.

His comments made at a public meeting in Oughterard about a direct provision centre for the village saw him triple his support there from 200 first preference votes to 600 votes.

Mairead Farrell arrives at the election count. Subdued by most standards and no Come Out Ye Black and Tans, yet returning officer gives out. pic.twitter.com/PwkuJMsFOr

His share of the vote across the constituency went from 11 per cent to 13 per cent. He attributed his rise in support to his constituency work or as he put it“ground hurling”.

Ms Farrell (30) is the youngest TD elected in the constituency. It has been quite a turnaround from her failure to get elected to Galway City Council last year when she received just 522 votes in the local elections.

She got 8,464 first preference votes this time around becoming the first Sinn Féin TD to be elected for the constituency since 1922.

Poll topper Éamon O’Cuív was pleased with the Fianna Fáil vote which held up but it wasn’t enough to get his running mate Cllr Ollie Crowe elected.

Mr O’Cuiv, Mr Grealish and Ms Farrell were elected on the eighth count all having exceeded the quota.

Outgoing Fine Gael TD Hildegarde Naughton and outgoing independent TD Catherine Connolly were both elected without reaching the quota on the 12th count.

Social Democrat candidate Niall O’Tuathail had hopes of winning a seat but his first preference vote of 3,623 was well short of what was required and he was the last candidate to be eliminated.