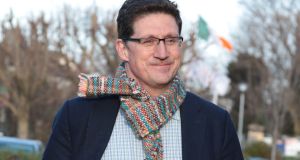 Green Party Leader Eamon Ryan had government formation discussions with the leaders of Sinn Féin, Fianna Fáil and Fine Gael on Wednesday morning, and was due to meet with the Labour Party on Wednesday afternoon. Photograph: Collins

The Green Party has not ruled out working with any party, and had “positive” meetings with a number of political leaders on Wednesday, Eamon Ryan has said.

Mr Ryan, leader of the Green Party, had government formation discussions with the leaders of Sinn Féin, Fianna Fáil and Fine Gael on Wednesday morning, and was due to meet with the Labour Party on Wednesday afternoon.

“All meetings were positive and there has been a willingness amongst the other leaders to engage with the Green Party and the increased mandate of the party,” Mr Ryan said.

“We want to see serious and committed action to tackle climate change and biodiversity loss and we need to do that in a way that improves people’s quality of life and protects our economy.”

Mr Ryan said he will be meeting with the Social Democrats and Solidarity-People Before Profit “over the coming days”.

He added: “ We look forward to further engagement with all parties.”

Sinn Féin’s Mary Lou McDonald is currently in the process of meeting with the leaders of left-leaning parties to discuss coalition options, while Taoiseach Leo Varadkar has said he expects his party to be in opposition in the 33rd Dáil.

Malcolm Noonan, the Green Party TD for Carlow-Kilkenny, said party discussions were still in “early days” but the Greens would only work with parties who had a “conformative stance on climate action and biodiversity, because that’s what we were mandated on”.

“We have an ambitious plan that may not be palatable for some people,” he added.

When asked if recent “Up the Ra” comments by Waterford TD David Cullinane gave him pause for thought about entering into government with Sinn Féin, he said: “There’s no doubt that it’s made a lot of us nervous, but it’s not a criteria for this [government formation].

“They were the largest party in terms of percentage vote and it is incumbent on all of us to look at all options to form a stable government.”

Neasa Hourigan, the newly elected Green Party TD for the Dublin-Central constituency, said she is neutral in terms of which parties go into government, but said it is imperative that climate action is a priority.

“We said from the very beginning of the campaign that it would be a policy-driven decision. It’s not about Sinn Féin, it’s not about who’s taoiseach, it’s not about Fianna Fáil or Fine Gael. It’s about what we’re going to do – the work of government,” she said.

She added that parties would need to increase their commitment to climate action before any agreements would be formed.

“Sinn Féin’s manifesto was really weak on climate change, and we’re trying to achieve a 7.6 reduction per annum in emissions over the next 10 years, and their manifesto was nowhere near that,” she added.

‘We are with you, in thought and in spirit’ - President broadcasts message on Covid-19 13:11
Timmy Dooley faces uphill struggle as Seanad election count resumes 13:06
Teenager brought into special care amid concern she was being sexually exploited 13:07
Cork men quarantined in Vietnam after St Patrick’s Day party 12:55
Coronavirus: Surge in cases still expected to hit hospitals in coming days and weeks 12:25

1 Coronavirus: Surge in cases still expected to hit hospitals in coming days and weeks
2 ‘Everyone still thinks it’s a joke’ - parents of toddler with coronavirus speak out
3 Coronavirus: Trump’s tone changes as US faces brutal loss of life
4 ‘Putin is crazy’: Russian leader lambasted over US coronavirus aid
5 Coronavirus: Westmeath has highest rate of Covid-19 outside of Dublin
Real news has value SUBSCRIBE