Purchase of printer too big to fit inside Dáil investigated 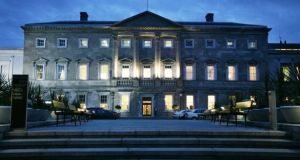 The printer has now been installed but is not in use due to an industrial relations stand-off between the Oireachtas and staff tasked with using the machine. Photograph: Alan Betson

The clerk of Dáil Éireann is to investigate the purchase of a €808,000 state-of-the-art printer by the Oireachtas, which had to be put into storage for nearly a year as it was too big to fit inside the building.

The Oireachtas had to spend more than €230,000 on unanticipated building works to get the new printer into the building because the original measurements taken were wrong.

Compounding the controversy, some Oireachtas staff have refused to use the new machine in an industrial relations stand-off over requests for a pay rise for work that requires up-skilling.

Following a report by The Irish Times over the weekend, based on documents obtained under the Freedom of Information Act, a senior Oireachtas official is to complete a report on the spending.

The clerk of the Dáil Peter Finnegan has told the Public Accounts Committee (PAC) he will complete a written report on the issue by Thursday, and will also appear before the public spending watchdog to answer questions.

“The report will deal with the full costs association with the procurement together with any other relevant issues,” Mr Finnegan told the committee in an email on Monday.

His report will also be sent to the Oireachtas Commission.

The Komori printer – which is 2.1m high by 1.9m wide – was delivered to Ireland on December 5th, 2018, by the UK manufacturer. But it was placed in storage in Ballymount Industrial Estate, with the company’s Dublin agent, Portman Graphics.

The printer could not be installed for 10 months because the required building works had not been completed. This included tearing down walls and embedding structural steel in order to give it the height clearance it needs to operate.

The storage costs amounted to €2,000 a month, after an initial gratis period of four months. The total storage cost came to €12,000 when the printer was finally installed on September 28th, 2019.

A briefing note from December 12th, 2018, to Mr Finnegan, by the then head of communications Derek Dignam, indicated it was not possible to return the printer to the manufacturer after the measurement error was discovered, as the contract had already been signed.

David Cullinane, Sinn Féin TD and PAC member, questioned why Mr Finnegan had not disclosed the issues encountered with the printer and the required extra building works when he was before the committee in July.

Mr Cullinane described the matter as a “complete mess,” he said.

“I want to see Mr Finnegan before the PAC again. I welcome the fact that he is conducting a review, but there should not be a need for a review … This is a question of accountability,” he told RTÉ’s Morning Ireland.