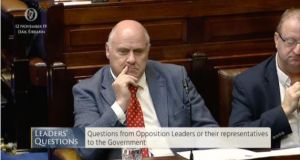 Noel Grealish was nowhere near the Dáil chamber when Leaders’ Questions rolled around again. Photograph: Screengrab from Oireachtas TV

“I like statistics,” remarked the Taoiseach during a discussion on the crime rate in Cork.

“I am a believer in science – this is Science Week – and I like statistics.”

Has Leo met Noel Grealish, by any chance? They share a mutual interest in figures, although in the case of deputy Grealish, his statistics are not necessarily burdened by the facts.

There was still some quiet annoyance around the Dáil on Wednesday, the day after the Galway West TD asked the Taoiseach a pointed question about the volume of personal remittances being sent abroad from non-Irish nationals living here, singling out those transferring money to Nigeria for specific attention.

We say some annoyance. But not that much. With an election coming down the tracks, some backbenchers could easily be thinking that Grealish posed his provocative question on foot of some unique market research gleaned in his own Galway backyard.

In September, the Independent TD spoke at a public meeting about a direct provision centre planned for the town of Oughterard where he made comparisons between “good Syrian Christians” and “economic migrants from Africa” whom he called spongers.

He reportedly got a good deal of support for his views.

On Tuesday in the Dáil chamber, the member of the Rural Independent Group made no bones about the fact he isn’t so much concerned about the remittances going to other EU countries. No, it was the “non-EU” countries which troubled him. He mentioned only one from a dizzying choice – Nigeria.

And he came armed with figures from “The Wor-ild” bank. These were not the figures he got from the Irish Government, via the Central Statistics Office, when he tabled a written parliamentary question on the same apparently hot topic a few weeks earlier. They show an unremarkable outflow to Nigeria compared to other countries.

Noel ignored them, choosing instead to cite a much higher figure from more questionable data. He never let on he had the other data in his possession.

“Astronomical” sums – running into billions – were leaving Ireland for Nigeria, he told the Dáil, far more money going there than to anywhere else in the world. Noel was concerned the reason for this might be due in part to fraud and criminal activity and what was the government going to do about it.

At the time he was asked the question, Leo Varadkar was at a disadvantage. Much as he may like statistics, he admitted he wasn’t in a position to dispute Grealish’s figures. He was also unaware that the TD had been furnished with official figures from his own department a few weeks earlier. So Noel’s eye-watering €3.4 billion in Irish money pouring from here to Nigeria went onto the Dáil record, uncontested.

Solidarity TD Ruth Coppinger kicked up a stink at the time, accusing the TD of indulging in racism.

So Grealish and the Nigerian money hogged the headlines for the rest of Tuesday and on into the next day. Newspapers, radio shows and internet platforms - all full of the story.

On Wednesday, mission accomplished, deputy Grealish was nowhere near the Dáil chamber when Leaders’ Questions rolled around again.

So why would he bother? His work was done.

Business moved on. But Ruth Coppinger wasn’t letting go. As it turned out, she found an unlikely ally in the Taoiseach.

The Dublin West TD, who would later point out that one in four of her constituents are non-Irish, returned to Noel and his “extraordinary figure of billions given out about one particular group”. She hoped the Taoiseach would agree it is important that the Dáil record should remain accurate and be corrected.

She pointed out a number of organisations, including Unite and Ibec, two groups from either end of the workers’ spectrum, came out overnight to say the true amount for remittances to Nigeria is about €17 million a year, which tallies with the finding of the Central Statistics Office originally sent to Grealish. Why, Coppinger wondered, did Grealish not use this figure which he requested from the government? “Obviously, the truth was unimportant in comparison to his aim. He actually exaggerated the figure by over 31 times.”

To be fair, Noel didn’t exaggerate it. That was the “Wor-ild Bank” in whom he appears to have great trust, even if a quick Google of how the figure is compiled might have shown him otherwise.

The Dáil record needed to be set straight after Noel threw out his unchallenged €3.4 billion figure, Ruth insisted. “It is important this is corrected. It got massive publicity yesterday. For 20 hours, these figures were reported uncorrected.”

“That was the point,” remarked Michael Collins from Cork South West, a member of the Rural Independents Group. We’re not quite sure if this was uttered in support or otherwise of his fellow RIG member.

The Taoiseach was very happy to step in “on a point of information and clarity.”

He now had figures (pity he didn’t have them on Tuesday) from the CSO which is in his department “and is a very well-regarded and reliable statistical agency”. They indicate “remittances from Ireland to Nigeria are about €17 million a year, which isn’t an enormous figure”.

They were far bigger for Poland, Latvia and Hungary, for example.

“I could go on,” said Leo, but he didn’t. Noel wasn’t there to hear him anyway.

As for those figures supplied by his fellow statistics buff, they are estimates provided to the World Bank by Nigerian authorities and are not actual data. Their “back book in respect of remittance flows between Ireland and Nigeria are open to serious scrutiny and we would believe our statistics are the accurate ones and not those of the Nigerian authorities”.

Record corrected, which is something. Even as the chamber resounded to the clatter of a stable door slamming and a horse of different colour was already galloping away to insinuations new.

Ruth then produced the most pointless question of the day.

“Is Deputy Grealish going to come in and apologise?” she asked the Ceann Comhairle, who wasn’t going to supply the answer because everyone already knew it.

She persisted. “Is he going to apologise and will you ask him to do that?”

“Twenty hours of publicity, he got.”

You couldn’t buy that.