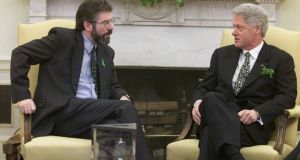 US president Bill Clinton and Gerry Adams in 2000 in the Oval Office of the White House. Photograph: William Vasta/AFP/Getty Images

The extent of Bill Clinton’s involvement in the tortuous early days of the Northern Irish peace process is revealed in a series of transcripts of telephone calls and briefing notes just released to The Irish Times by the Clinton Presidential Library.

The library, based in Little Rock, Arkansas, holds the official archive of the Clinton presidency and has released transcripts of phone calls between Mr Clinton and the leaders of the Northern Irish parties and also with then British prime minister Tony Blair and taoiseach Bertie Ahern between May 1998 and summer 2000. A series of memos from Clinton’s national security adviser, Sandy Berger, was also released.

The documents reveal an extraordinary immersion in the day-to-day negotiations and choreography of the delicate early days of the process between the Belfast Agreement and the establishment of the Northern institutions following the crisis over the decommissioning of IRA arms in 1999-2000.

Clinton employed mixture of flattery, persuasion and arm twisting on the North’s leaders, while keeping a constant open channel of communications with Blair and Ahern.

The transcripts released begin with calls from Clinton to all the leaders on the day of the simultaneous referendums, North and South, on the Belfast Agreement in May 1998.

“Bertie, it’s a great day for the Irish,” Clinton tells Ahern.” You must know by name every SOB that voted in the Republic.”

“I think we got 95 per cent,” Ahern tells him. “It’s almost as good as our last election.”

The call with then Ulster Unionist leader David Trimble reflects a more cautious tone, recognising the mixed feelings in unionism about the agreement.

“If it was a Westminster election today I would have lost my seat,” Trimble tells the US president. “I have a problem but it will come right.

“I am now looking for Adams to divvy up a bit,” Trimble says. “There are a number of things he has got to do and the sooner he starts doing them the better.”

“I will get on it,” Clinton tells him.

The call with the Sinn Féin leader appears to show a closer relationship.

“You guys did a great job . . . You are in a stronger position now; with this vote, you have been validated,” Clinton says.

Adams says he will visit Washington the following week and would like to see Clinton at the White House. “If I’m in town, I’d be glad to see you,” Clinton says.

Adams then requests that Clinton say hello to his wife, and hands over the phone.

“I’m very proud of my husband,” she tells him, before handing the phone back to Adams.

The Sinn Féin leader then tells Clinton that his son is playing for Antrim against Donegal. If they win, he says, that would be the ultimate miracle. (As it happens, he was right: Donegal won by a goal.)

By August, however, the post-referendum gloss has come off the outlook. In a memo from Berger ahead of discussions with Blair, Clinton’s national security adviser suggests that he warn Blair about marginalising Adams, and weakening him with his “hard men”.

Berger’s memos demonstrate the extent to which Clinton was involved in trying to coax the sides into the Executive. At one point he suggests that the situation will “require you, Blair and Ahern to engage in very quiet and personal diplomacy to set up the choreography that gives Trimble cover to let Sinn Féin into the Executive, allows the IRA to spin their folk the decommissioning, and protects Blair from accusations of appeasement”.

The process was long and difficult. In June 1999, Clinton calls Trimble from Air Force One. He tells the unionist leader: “You guys can wake me up in the middle of the night if you think of anything I can do or say that will either help you with your own people by showing the United States will give you the high ground by completely disavowing the other side if they don’t keep their word, or if you can think of anything I can do to persuade Sinn Féin to come closer to you. I will do that. I know what position you are in.”

“I will try not to disturb your sleep,” Trimble replies, “but I thank you very much for this call.”

Saving Trimble is an over-riding concern – but so is Adams’s position. At one point, Clinton tells Adams: “In the end, Gerry, no matter what Tony does or what I say, Trimble, to get a deal, is going to have to take some risks. You are going to have to take a world of crap. We can’t immunise him from all that risk. You can be neutralised, but he can be deposed.”

Blair and Ahern considered how to use Clinton’s influence to maximum effect. In a phone call in early July, Ahern talks Clinton through the sequencing of declarations and events that would allow the Executive to be formed.

“I think it will be very helpful if you could call and have a word with them,” Ahern tells him.

Ahern tells him to call Adams now, and they will ring him back when it’s time to call Trimble.

“Right,” says Clinton. “Give us a call when you’re ready for me to call Trimble.”

“Bertie, the president of Korea is coming in here for two or three hours, so I will call Gerry now and the quicker I can call Trimble, the better. It’ll be hard to walk out of the meeting.”

When he calls Adams, the mood is cheery. They discuss whether Trimble will go for the deal.

“I think he is going to do it. I’ll bet you a dollar he goes for it,” Adams says.

“That is a dollar I would love to pay off,” Clinton replies.

“It sounds silly and I couldn’t say to him like I can to you, but we’ll make sure he’s okay,” Adams says. “I look forward to taking your money.”

A few hours later, Clinton is on the phone to Trimble, who is telling him he cannot do a deal that day, but he is hopeful that his party can be brought on board in the coming days and weeks.

Clinton is keen to assure him that they will stand by him. Referring to Sinn Féin, he says, “Personally, if they screw us on this, I will support kicking them out and stand up publicly and say that you are not to blame and they are.”

He also offers to call unionists – such as Reg Empey and Jeffrey Donaldson – who have opposed Sinn Féin’s entry into government.

By January 2000, the process is in deep trouble. Trimble is under pressure and the IRA is refusing to give a clear timetable on decommissioning. Adams tells Clinton he can’t deliver.

The decommissioning issue is being used by the unionists, Adams says, “to choke the process”.

But Clinton’s view is that it is the IRA that has to move. Trimble, he tells Adams, “has eaten a lot more than the IRA has. He’s eaten his words four or five times and then he just found a way to get out of it and survive.”

If the process collapses over the IRA’s failure to decommission, Clinton warns, “All the Americans who have normally been so supportive of you will basically say the same thing that they didn’t come across.”

“The big thing is to keep the IRA sidelined and spectating in this,” Adams says. He warns that even the proposed statement – which says that the leadership of the IRA will consider putting its arms beyond use – “is going to cause trouble within republican ranks”.

“But that’s buying trouble without the benefits,” Clinton says. The IRA should make a symbolic act of decommissioning to build confidence, he adds.

“I agree with you completely, but we tried and failed,” Adams responds.

By May, the calls reflect a more optimistic mood. On May 27th, Clinton calls Trimble to congratulate him on persuading his party to back a package of proposals, including the IRA’s promise to decommission, to reinstate the power-sharing institutions.

“You were brilliant,” Clinton tells him. They may have to give you a second Nobel peace prize.”

“The weird thing about politics is that sometimes you have to take more grief from your friends than your enemies,” Clinton adds.

A few minutes later, Clinton calls Adams. “I hated to see Trimble have to go back to all his crazies, but it came out okay.”

“Once again we are at this point because of your unique understanding,” Adams tells him. “I have been saying to people: let’s make sure we get as much progress as we can while you are in the White House. It’s no accident that this has happened during your presidency. Thanks again.”