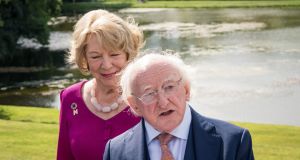 President Michael D Higgins has said the new challenges of Brexit and its implications for the North, and the need for a “truly social Europe” were among his reasons for seeking a second term in Áras an Uachtaráin.

Speaking in Castlebar, Co Mayo, Mr Higgins said he had also been approached by a number of people from late 2016 who had asked him to continue.

Asked why he had changed his mind, having stated he would serve one term as president, Mr Higgins said during the 2011 campaign and afterwards his concentration then was on “the seven years to come”, and on fulfilling the “ceremonial aspects” of the role and “representation abroad”.

“As I have worked now for the last six-and-a half years, I found I could do it and do it with energy, and then a number of things happened that couldn’t have possibly be anticipated, such as the changes in the multilateral system, and Brexit is another,”he said.

Mr Higgins said that “particularly since the end of 2016”, people from “all sections” had approached him and asked him if he would seek a second term.

“Then I announced I would take time to consider my position, I thought about it long and hard, and then said early in July I would make a decision and this is what I am doing, on July 10th – four months from the time I finish my term on November 10th,” he said.

Mr Higgins, who was speaking following the opening of an exhibition of Traveller culture at the National Museum of Ireland in Turlough Park, said that Article 12.4.4 of the Constitution stated that “former or retiring presidents may become candidates on their own nomination”.

“When the order for an election is made, it is my intention to offer myself as an independent candidate,”he said.

“It is something that hasn’t happened before – on the last occasion it was President de Valera, and his opponent was Tom O’Higgins,”he said.

“Things are very different, but I have had the opportunity of legal advice and legal opinion,”he said.

“The truth is, I am not exactly stuck for something to do,” he said, when pressed on the reasons for his decision.

He believed it was the best way to spend “the next seven years of my life.”

“I am deeply committed to Ireland, and I have reasons to be concerned about Ireland, both at home and abroad,” he said.

“It is because of that I am offering . . I am not just saying that I am continuing.”

Asked about the possibility of an election, Mr Higgins recalled the campaign of 2011 and said his responsibility was for his “own nomination”.

He would pursue a campaign with “energy, vigour, humility” and with “a deep appreciation of the support I have been offered.”

The reason that he was making the announcement in this way was that he was separating it from his work as president, he said, speaking outside the exhibition and on museum grounds.

Mr Higgins said that his many engagements, obligations and appointments as president would continue.

“ Of course it isn’t usual circumstances, but I am approaching it, I assure you, with robust energy,”he said.

He paid credit to his wife Sabina for her involvement, and said it had been a great honour to represent Irish people at home and abroad.

He referred to the public’s appreciation of recent commemorations, while he also believed that his consultation with young people was “something on which further work can be built”.

He recalled also his consultations on ethics, and said there were “many further initiatives” which he had in mind, and which he would share when he lodged his nomination papers.

He said Europe was in a fragile condition, and stressed the importance of social cohesion, and of “restoring the connection with the European street”

Mr Higgins said his health was excellent, and reminded journalists that his mandate in the 2011 election was over a million votes.

“If I felt I couldn’t do this job with energy, and to get the kind of response I have been getting, I wouldn’t be doing it,”he said.

There was “no reason for a campaign to be down and dirty,”he said in response to further questions.

He said he was amused by comments that he might be an “establishment candidate” and he thought it most unusual as he “hadn’t heard it for 50 years.”

He said he would prefer not to comment on the comments made by Senator Craughwell in relation to the timing of his announcement.

“Of course I have a constraint, in that I may not be able to do it in the way I had done it before because of my presidential duties,”he said. “But I will fulfil all of my duties as president in office.

“I just wish to say to anyone seeking this office – the discourse is important,”he said. “Let it be positive and let it be about how we can best serve Ireland, rather than any personal suggestions one way or another.”

“I have never shirked a campaign in my life,”he said.