A Government backbencher has accused public servants of laziness and claimed that they are using the Covid-19 pandemic as an excuse to “lie on the couch and watch box sets”. Video: Oireachtas TV 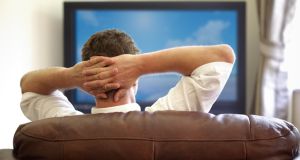 A Government backbencher has accused public servants of laziness and claimed that they are using the Covid-19 pandemic as an excuse to “lie on the couch and watch box sets”.

In a broadside attack on “many elements of our State agencies, Government departments and local authorities” Fianna Fail TD Marc MacSharry alleged State employees were opportunistic in using the crisis “to do nothing”.

In the Dáil late on Tuesday night the Sligo-Leitrim TD said he had “dealings” recently with one State agency “where no one will be back in that office until the end of August”. They are working from home and “you have to talk to an answering machine”.

Mr MacSharry was speaking during debate on legislation about the Covid-19 pandemic unemployment payment.

He praised staff in the Department of Social Protection who had got so many Covid-related schemes up and running and “managed to get money to people pretty quickly, in the main. They deserve much credit”.

But he contrasted that effort with “many elements” in the public service who are “using this situation as cover to lie on the couch and watch box sets, returning an odd call here and there and doing the maximum of the minimum to tick over during this period”.

Productivity had fallen and “that is unacceptable”, he said.

“Whether it was “opportunism”, “laziness and/or poor management, it needs to be addressed because the country needs all its officials working at full tilt to get productivity levels up to the maximum so we get through this crisis in the best possible way”. He contrasted poor public sector performance with private sector activity much of which was back “at full tilt”.

He said staff in his own office “did not stop for an hour since the onset of Covid-19”. He knew Ms Humphreys has “worked at full tilt throughout this time. I know I have, as have many colleagues, probably all, in the political world.

“Many people are not, however, and that needs to be addressed.”