Department plans to review 700,000 welfare claims by end of year 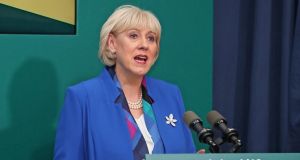 Minister for Social Protection Heather Humphreys told the Dáil that more than 2,500 pandemic unemployment claims had been closed as a result of checks carried out at ports and airports. Photograph: Julien Behal/PA Wire

Ministers have been warned that it will be “critical” to reduce the number of people in receipt of pandemic welfare payments to keep the economic deficit at “manageable levels” amid concern about the rising cost of the Covid-19 crisis.

Briefing papers compiled by officials in the Department of Social Protection for Minister Heather Humphreys also reveal that the department plans to review 700,000 welfare claims through inspections and reviews by the end of this year in an effort to save up to €520 million.

Amid concern from her officials about the rising welfare bill, Ms Humphreys last night defended the withholding of the pandemic unemployment payment (PUP) from people travelling abroad.

She told the Dáil that more than 2,500 pandemic unemployment claims had been closed as a result of checks carried out at ports and airports.

According to her department, “over 90 per cent” of these individuals were leaving the country permanently.

While flexibility was traditionally applied to other welfare payments allowing them two weeks’ foreign travel, this never applied to the PUP, Ms Humphreys said.

The documents show officials informed the Minister that 500 jobseekers’ claims would be reviewed this month. Concerns were also raised about a significant increase in the number of collective redundancies notified over the past number of months on foot of the Covid-19 pandemic, which is running at twice the number so far this year compared with all of last year.

Officials said it was expected that there would be a “significant increase in the number of redundancies processed this year”.

Despite this, they have cautioned against the reintroduction of a rebate scheme for employers, stating that it would have “very significant budgetary implications, particularly at the moment with a significantly higher level of jobs at risk of redundancy than before the pandemic”.

Briefing materials drawn up separately for the new Minister for Public Expenditure, Michael McGrath, show he was told by officials that “reducing the number of people on the PUP is critical to release funds for other support measures and to ensure that the fiscal deficit is kept to manageable levels”.

Officials also warned that “maintaining the [public-sector] pay bill at sustainable levels will be an ongoing challenge for 2020 and beyond”.

The Government is to meet public-service unions in September “to explore the potential” for a new agreement on pay for its 340,000 employees.

Mr McGrath on Tuesday held what were described as a “wide-ranging and constructive “ talks with senior officials of the public-service committee of the Irish Congress of Trade Unions.

He reaffirmed that the Government would pay the 2 per cent increase in pay for public-service staff scheduled for next October. This is the final instalment of the current public-service accord which expires at the end of the year.

Meanwhile, the Government continues to face Opposition criticism over its own pay bills despite announcing a 10 per cent salary cut for all Ministers.

On Tuesday, the three Ministers of State who sit at Cabinet who were to receive a controversial pay top-up agreed to gift some of the money back to the State. This means the three Ministers will share two allowances instead of three, giving them an extra €10,000 each instead.