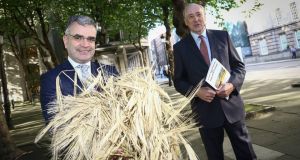 How many headless chickens does it take to run a government?

We’re not sure. They’re still counting in Merrion Street.

On Tuesday, Micheál Martin’s hapless coalition continued bumbling along its unbroken blunder path by showily attempting to rescue its flagging fortunes through an act of risible sacrifice – and failing with flying colours.

Not unexpectedly, Operation Waiving, Not Drowning only made matters worse.

All weekend, people had been trying to work out what the Government and its legion of advisors were thinking when opting to make a stand for workplace equality by rushing through legislation to ensure one of its three already well-paid “super junior” Ministers didn’t miss out on a €16,000 wages bump-up. It’s not like there are other, more pressing issues to be getting on with.

But no, this priority-focused Government had to do right by Hildegarde, Jack and Pippa. And it did, making the Dáil vote in a hurry so the three could get their money, completely oblivious to how a pandemic-scarred public might see this.

The Government now stands charged with animal cruelty. Gratuitous slashing of PUPs, to be precise

Never mind: they had the big launch of the masterplan to reopen schools organised for Monday, and this hugely awaited announcement would take over the news agenda and be widely welcomed by all. It would also be a marvellous indication of greater things to come from a proactive new Government shaking off its poor start.

Micheál is staking his reputation on getting the roadmap launched and into action. It will be tweaked along the way if necessary.

“This is a live document,” say the Government representatives of their education blueprint, emphasising this readiness to work up to the wire with it.

Not the best description, given the accident-prone nature of their first month. You’d be afraid to let them near anything labelled “live”. The super juniors could be electrocuted. Norma Foley might explode.

To make matters worse for Micheál’s mixed-message Government, it now stands charged with animal cruelty. Gratuitous slashing of PUPs, to be precise. Guilty as charged.

The Pandemic Unemployment Payment, availed of by people who would ordinarily be working away as normal except for the Covid-19 business lockdown. If they go away for a short holiday – even to one of the countries deemed acceptable on the Government’s “green list” for travel abroad – their payment will be withdrawn.

Meanwhile, in an attempt to divert growing public disgust over spoiled super juniors and injured PUPs, the Cabinet detonated a 10 per cent ministerial pay cut in the hope this selfless act of sacrifice would melt public hearts.

It only served to harden them.

Instead of heading into the last week of Dáil business before the summer recess with a morale-boosting schools initiative changing the narrative, the Taoiseach stepped right back into his own government’s sloppy mess. Did they really expect bouquets for announcing they won’t be earning as much over a hundred thousand as they used to?

Not a mention of the education roadmap during Leaders’ Questions and barely a reference too it during the later knockabout exchanges on Government policy.

Instead, the main opposition was determined to make hay over the tripartite Government’s astonishing failure to read the room.

Mary Lou McDonald, wearing a shiny, transparent visor so the Taoiseach wouldn’t miss as much as a twitch in her towering disapproval of the PUP cuts, went to town on him and the “ludicrous, farcical and deeply, deeply unfair situation” his Government knowingly engineered for blameless workers.

How could he “punish and make an example of people who lost their jobs because the Government closed down the country because of the pandemic”? she cried.

We could see where she was going here. Before long, Mary Lou mentioned again that these workers were only in difficulty because the Government pulled the plug on them.

The Sinn Féin leader was scandalised. She sincerely hoped Micheál wasn’t trying to imply that 287,000 were all trying to “scam” the system, although she was well aware he wasn’t.

But a denial from a Taoiseach is always worth a punt.

And where’s all this “the Government closed the economy” talk coming from? He reminded her that all parties, including her own, were fully behind the measures taken at the start of the crisis. Mary Lou knows that full well too. But no harm in planting the seed anyway, particularly when the Government isn’t exactly popular right now.

Hildegarde, Jack and Pippa decided to pool the two salaries and divvy up the €32,000 between the three of them

Inevitably, she got stuck into the ministerial pay debacle which joyously lurched further along the blunder path with news that the highly paid super juniors were going to put themselves out considerably, and for the sake of the nation, by not accepting the increase which the Dáil went to the bother of voting for last week.

Big deal. It was just the extra €16,000 for the third super junior, as the existing two posts had the money ringfenced in law. The three need this money to distinguish their brilliance from that of mere junior ministers, who also earn in excess of €100,000.

Hildegarde, Jack and Pippa decided to pool the two salaries and divvy up the €32,000 between the three of them.

The Taoiseach was very reluctant to talk about money. He isn’t in the job for the salary, he told the Dáil, sounding rather embarrassed at having to mention such a vulgar matter. But he confirmed he “gifted” close to €25,000 to the exchequer by taking a wage cut.

“Is this a cut or is this a waiver?” demanded Labour’s Alan Kelly, looking a gift horse in the mouth.

Alan was more concerned with the eye-popping extravagances in the new Government, where the Tánaiste appears to be setting up his own court with all the trappings as if he never left the Taoiseach’s office.

Leo Varadkar has also taken on a military attaché in order to underline his importance.

And the best of all is the former Tánaiste, who is not entitled to a State car and driver unless the Government decides otherwise. What government would do that in these difficult times?

“Hold me coat!” roars the Coalition, limbering up gamely.

No, the Cabinet never agreed to change the list of Ministers entitled to a car and drivers. Eh, but the former Tánaiste, now Minister for Foreign Affairs, has been given one anyway.

This Government has lost the run of itself, awarding itself pay rises, then pay cuts

“My understanding is that there is a security dimension to that which I’m not going to interfere with,” mumbled the Taoiseach when pressed on the issue of this nice little perk for Simon Coveney before hurriedly resuming seat because the time was up.

This may not be the end of the story. Alan Kelly has dug up some very interesting background information to how Simon ended up keeping his posterior on the soft leather of an exclusive Government car.

Kelly quickly rushed out a statement.

“This Government has lost the run of itself, awarding itself pay rises, then pay cuts; aides de camp, extra Garda cars and additional special advisers. It has left itself open to ridicule at a time when the country needs responsible government.”

Will nobody recognise their sacrifice?