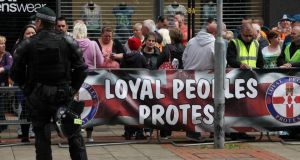 A PSNI officer looks on as crowds await the arrival of a contentious republican parade and related loyalist protests. Photograph: Stephen Kilkenny/PA Wire 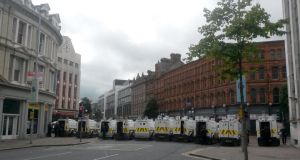 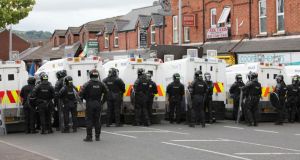 PSNI officers and vehicles in Belfast, as a major security operation is under way in the city centre ahead of a contentious republican parade and related loyalist protests. Photograph: Stephen Kilkenny/PA Wire 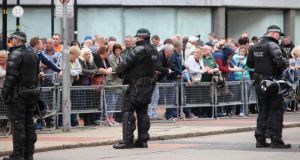 The parade commemorating the introduction of internment without trial by the unionist Stormont government in 1971 had dispersed peacefully initially after participants staged a rally in front of police lines blocking them at the nationalist Old Park Road.

On Sunday after 4pm water cannon was used by police when they came under attack in the Old Park/Rosapenna area from a group of nationalists, mainly youths, throwing bricks and petrol bombs.

Following the speeches, organisers announced the parade was over and the bands and marchers dispersed peacefully after 3.20pm.

An Anti Interment League spokesman said it had taken the “responsible decision” to disperse at the Old Park Road after its “human rights parade” was “blocked by the PSNI”.

He said Sunday’s event proved “nationalists and republicans were prohibited from the city centre at the behest of big business” and in future years the group would be applying to march on a Saturday when the city centre would be busier.

“If there was not internment there would be no parade,” he added.

There was a heavy police presence in Belfast city centre and beyond, with access to many streets blocked by cordons and large numbers of officers wearing riot gear.

Royal Avenue in Belfast on lockdown by PSNI ahead of today's anti-internment march. pic.twitter.com/m8H4AyX1a8

A number of those taking part in the contentious parade are associated with dissident republicanism.

Commanders had appealed for calm amid fears the marchers intended to break legal restrictions on timings laid down by Parades Commission.

Organisers had sought permission to hold the event from the government-appointed adjudication body, which stated that participants had to be clear of the city centre by 1.30pm to minimise disruption.

Participants signalled an intention not to enter the city centre until later in the afternoon, however.

Loyalist counter demonstrations in the city centre were due to start by 1.30pm against the rally marking the 44th anniversary of internment, which added to the deteriorating political and security situation in Northern Ireland at the time.

In the event, by the 1.30pm deadline the parade had yet to leave the Ardoyne.

Mr Hussey said: “The failure of republicans to comply with a Parades Commission determination has once again put the PSNI in an impossible position.

“It is clear that the police went more than the ‘extra mile’ in attempting to reach a solution to the parade dispute, but despite their best efforts the organisers decided they would challenge the determination.

“The fact that petrol bombs were thrown at the police indicates that there was an element of preparation to attack police officers.

“The use of water cannon is perfectly justified in these circumstances. No other police force in the UK would have to face such dangers.

“I hope that following this attack on the police and the deliberate breach of the determination, the authorities are swift to bring those responsible to the courts.

“I also want to see the judiciary take the view that petrol bombers are out to kill, and to ensure punishment for those appearing before the courts fits the crime.”

In 2013 more than 50 police officers were injured at the event when they were attacked by loyalist protesters and last year there were some ugly scenes involving sectarian taunts between loyalists and republicans and fire crackers and bottles being thrown.