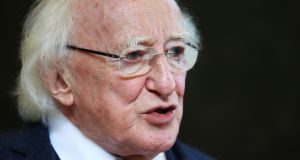 President Michael D Higgins has urged Britain and Ireland to use language carefully as the two countries disagree over issues surrounding Brexit.

Speaking in London, where he was attending a celebration of Irish women’s creativity for St Brigid’s Day at the Irish embassy, the President acknowledged that differences were inevitable.

“It’s very important that the language we use and the forms we use for the discourse should be positive and helpful. The British people have taken a decision which is respected by all of us in Ireland,” he said.

“In the discussions that are taking place between the United Kingdom and the Union and between the UK and ourselves, I think it’s very important that people realise and accept that we are trying to make sure that what we have achieved together is not put in any danger, for example in relation to Northern Ireland.

“We’ve had the benefits of peace following an accord 20 years ago. Remember it isn’t only the achievement of peace but the promise of peace because there is work continuing to be done.”

Mr Higgins said it remained unclear what the outcome of the Brexit negotiations would be but that it was important that Britain and Ireland should continue to co-operate regardless of the shape of the final deal.

“And one thing I’m certain of is that whoever is in power in Ireland, from whatever tradition, will want to build on the good will of what we have achieved together. And that’s positive I think,” he said.