Post-Brexit customs checks might not be on actual Border 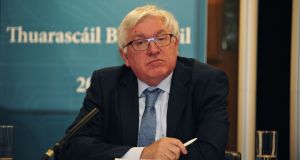 Liam Irwin of the Revenue Commissioners said that within 10-15 km of the Border there could be “trade facilitation posts” to allow for customs declarations on incoming goods. Photograph: Aidan Crawley

Customs checks after Brexit may not be on the actual Border but “somewhere in proximity” to it, a senior Revenue official has said.

Liam Irwin, of the Revenue Commissioners, told TDs and Senators that most of the customs checks could be done electronically, though some goods travelling between Ireland and Britain would have to be physically checked.

Mr Irwin was speaking to the Oireachtas Finance Committee as part of a delegation of senior officials, led by John Callinan, Ireland’s most senior official dealing with Brexit.

Mr Irwin said that after Brexit, it was likely that the UK would be a “third country” and this meant that “all trading transactions will be subject to customs declarations.”

He said the Revenue expected that the number of customs declarations will increase “tenfold”.

“Customs controls – yes. At the Border? Possibly not, but somewhere in proximity to the Border,” Mr Irwin said.

In response to questioning from Sinn Féin’s Pearse Doherty, Mr Irwin repeatedly denied that the Revenue had identified locations on the Border for “customs posts”.

Mr Callinan said officials had not sought a special status for the North as there was no clear meaning as to what this was.

He said Ireland and the EU had pledged to seek “flexible and imaginative solutions” to the problems of the Border and that keeping the North within the single market or within the EU was “not in Dublin’s gift”.

Sinn Féin Senator Rose Conway Walsh said the Dáil had voted for special status for the North and civil servants should take account of this in their contacts with the EU and the British.

“I am concerned that the political direction of the Civil Service is at odds with the democratic wishes of the Dáil,” Ms Conway Walsh said.

Mr Callinan pointed out that the Civil Service took political direction from the Government, not from the Dáil.