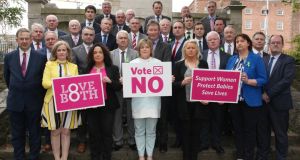 More than half the Fianna Fáil parliamentary party has united to call for a No vote in the forthcoming referendum on the Eighth Amendment.

Thirty-one members of the party, including deputy leader Dara Calleary and the party’s finance spokesman Michael McGrath, participated in a photocall in Dublin’s Merrion Square on Tuesday afternoon urging voters to oppose the proposition to remove article 40.3.3 of the Constitution.

The event was arranged by Fianna Fáil TD for Waterford Mary Butler in response to a similar photo taken in the same venue by 10 of the party’s members calling for a Yes vote in the referendum.

The photographs from Tuesday afternoon have not been released as members of the party were conscious of publishing them in the midst of the ongoing controversy over the cervical cancer screening. Ms Butler did not return calls for comment.

The photograph was supplied to The Irish Times by a Fianna Fáil TD on Thursday afternoon.

Further events are planned including the release of videos from various members advocating the retention of the Eighth Amendment of the Constitution.

A total of 31 members were present for the photocall, including frontbench spokespersons Eamon Ó Cuív, Niamh Smyth, Anne Rabbitte and Margaret Murphy O’Mahony.

The group of TDs and Senators within the party demonstrates the significant division within Fianna Fáil on the issue of abortion.

It will also prove to be a difficulty for party leader Micheál Martin, who supports the repeal of the Eighth Amendment and allowing for access to terminations up to 12 weeks.

Fianna Fáil TDs and Senators are entitled to vote according to their conscience on the issue.

Coronavirus: Further two deaths in Republic as expert warns against ‘rush’ to ease restrictions 17:20
Installation of new Presbyterian Moderator to be attended by just four due to Covid-19 17:10
Two gardaí posted to Americas to tackle international crime and terrorists 16:46
Army officers evacuated from Goma after weeks of delay 16:43
Robberies from homes down 60% due to pandemic 15:57