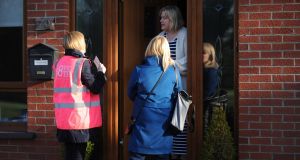 Majella McGuire Flanagan speaking to Campaigners for the No campaign in Castleknock, Dublin. Photograph: Aidan Crawley

A Fine Gael Minister, a Fianna Fáil TD and an independent senator have all warned in recent days about the growing proliferation of unregulated online advertisements in the abortion referendum campaign.

Minister for European Affairs Helen McEntee said Government may need to seek a change in the law to govern online campaigning in the future, but encouraged Yes campaigners to “call out” misleading or false advertising by No campaigners.

Independent senator Alice-Mary Higgins called on social media platforms to stop selling online political ads before the referendum, warning that the referendum could become “another case study for bad practices” similar to the US presidential election of 2016, and the British Brexit referendum.

The Fianna Fáil TD James Lawless, who has published a Bill which would require internet companies to reveal the identity of advertisers who pay for campaigning ads online, said, “I don’t believe we should be censoring or arbitrating between fake news and real news. But I do think people have a right to know who’s paying for the ads.”

As the abortion referendum intensifies, online political advertising and campaigning have appeared more frequently in many people’s social media feeds. While there are strict rules around print or broadcast advertising during referendums and elections, there is no regulation or transparency of online advertising.

The Transparency Referendum Initiative (TRI), a voluntary effort which asks people to log political advertising, has assembled a database of online ads relating to the referendum on Facebook, Google and YouTube. Most are on Facebook, though there is a substantial YouTube presence as well, which is a more expensive medium.

As of yesterday, on Facebook alone, the initiative had clocked 470 different ads, from about 160 different sources. Most are from identifiable campaigners, such as the Love Both and Save the 8th groups campaigning for the retention of the amendment, and the Together for Yes group, campaigning for repeal.

“But there’s also anonymous, untraceable, foreign ads,” said Craig Dwyer, one of the founders of TRI. These ads are being backed by significant and increasing spending.

The majority – Mr Dwyer estimated about 60-70 per cent – are from the anti-abortion side.

In recent days, observers say there has been a marked increase in the number of ads from opaque or anonymous sources, some with apparent links to religiously inspired anti-abortion groups in the United States. Because of the way advertising on Facebook works, they can be targeted at specific cohorts of the population, and the number of people they reach increase by paying Facebook.

Though all information is necessarily anecdotal, driven by self-selected reporting to the TRI and observation of social media, the spending on many of these ads appears to be increasing. This is entirely in keeping with successful online campaigns observed elsewhere, including the Trump and Brexit campaigns, where spending became increasingly intensive and increasingly targeted as polling day approaches.

There is now much anecdotal evidence that there is a substantial foreign input to the Irish campaign, much of it on the anti-abortion side. However, as retain campaigners never tire of pointing out – with some justification – the biggest foreign input into the abortion debate (of which we are aware, anyway) is the €137,000 funding that Amnesty received from international financier and philanthropist George Soros to finance its campaign for abortion law reform. Amnesty has been ordered by the Standards in Public Office Campaign to return the cash, but has refused, and is challenging the order in court.

Yesterday, the Together for Yes campaign said it was “extremely concerned” about what it said were “Trump-style social media tactics by some elements on the No campaign”.

“We are all aware of the huge impact that manipulative online and digital campaigns can have on voter sentiment, as was witnessed in the Brexit vote in 2016,” director Ailbhe Smyth said.

John McGuirk, communications director of the Save the 8th campaign, acknowledged that online campaigning was a substantial part of the campaign, though he disavowed the overtly religious advertising as probably doing more harm than good to his cause. He also condemned attempts by the authors of some anti-abortion ads to masquerade as RTÉ news pages, which surfaced recently.

“Our online campaign has been fairly low-level so far,” he said. “That will change in the next couple of weeks as the research into online spending would suggest that its effectiveness grows as the time to the vote gets shorter.”

Much of the concern revolves around the misleading nature of some of the advertising. Websites or Facebook pages purporting to be “unbiased information” are clearly run by anti-abortion groups. But each side believes its information is unbiased.

There is a fair bit of alarm about being digitally outgunned among some people on the repeal side.

UCD professor of politics David Farrell is more cautious. “We know that online campaigning and advertising was a problem in the US election and Brexit,” he said. “It would be naive to think Ireland is immune.

“Let’s imagine it’s a tight result,” he said, “in a low-turnout election, which it might be. It will be a reasonable question: did the online spending have an impact?”

The great unknown is how effective online campaigning and targeted ads will be in an Irish context. But judging from the increased spending, both sides – but especially the anti-abortion side – believe it can be a very effective campaigning tool.

And it is the unknown and utterly hidden aspect of online advertising that most alarms transparency campaigners and concerned observers. Electoral laws require campaigns to be accountable for their spending and publicity. There is no such requirement for online campaigns.

Facebook promised to tackle the issue of fake news ads when its executives appeared at an Oireachtas committee recently to answer questions about recent scandals involving the social media giant.

In response to a number of questions from The Irish Times yesterday, Facebook supplied some detail about its vetting process for advertisements, but was unable to supply detail on the number of ads or the identity of advertisers. It said it had removed ads, but did not supply detail.