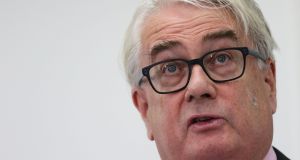 So why the row over judges’ pay?

Timing is everything. Pay for the higher echelons in the State is always a sore subject and pay rises are never popular. As Tánaiste Leo Varadkar said on Wednesday morning, it is never a good time. The Cabinet yesterday agreed to give judges a 2 per cent pay rise.

Well, all public servants were awarded a 2 per cent pay rise in October. However, judges are not public servants per se but are independent in their office and in their functions. Their pay has been pegged to the public service and they have benefited from pay increases over the years. However, there used to be a provision in the Constitution that prohibited reducing judges’ pay. That was originally drafted to protect the independence of judges.

However, in 2011 the government was intent that judges, along with everybody else, would take a pay cut. To achieve that required an amendment to the Constitution. The referendum on the 29th amendment was passed, unsurprisingly, by 80 per cent to 20 per cent. The inverse of that, however, is that judges’ pay is no longer pegged to that of public servants. So special regulations were needed to give judges the pay rise awarded under the national agreement to everybody else. That took time and that is why it is happening now, at the same time the Government has rejected giving student nurses pay.

How much is it worth?

There are 160 or so judges from the District Court to the Supreme Court. The top-earning judges in the superior courts earn more than €200,000 per annum, so the increase will be worth about €4,000 to them. Chief Justice Frank Clarke announced he would not take his pay rise worth almost €5,000. Overall, the cost to the exchequer will run to about€500,000*.

And what is this about pensions?

Well, around the same time the judges were feeling the cold winds of the public mood the financial emergency cuts under Fempi and public service pension reduction (PSPR) were being imposed on pay and pensions. The Cabinet announced yesterday that the cuts on pensions will be restored to all the highest-ranking employees and pensioners who sustained them after 2011. There are just under 4,000 retirees still subject to PSPR.

The majority of pensioners affected will see an impact of somewhere between €720 and €4,000 on their annual pensions. Many of these pensioners were higher public servants with salaries of €108,000 or higher when they retired.

Their pensions are therefore at least €54,000 and the restoration now means that the cuts of 17 per cent they had imposed in their pensions nine years ago have now been fully restored. The full cost of the PSPR restoration is €12 million.

It is not a huge amount but it cannot disguise the sense among the public that the top tiers are being looked after, while student nurses have been denied pay for their work on hospital wards during the pandemic.

*This article was amended on December 10th to correct an error