No deportations during pandemic unless threat to security, says Martin 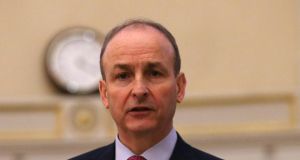 Since March just four people have been deported although 469 deportation orders have been issued. Photograph: Laura Hutton

People should not be deported during the Covid-19 crisis unless there is a threat to national security, the Taoiseach has said in the Dáil.

Micheál Martin told Social Democrats Wicklow TD Jennifer Whitmore that “deportation is a part of our wider migration management programme but in the context of Covid, we have obligations to the health of people, irrespective of status”.

He said those obligations applied for example “in terms of sending someone back to a red zone” where Covid-19 is prevalent.

Ms Whitmore had raised the case of a constituent who has to present himself on Thursday for deportation.

“It is two weeks out from Christmas, we are in the middle of a pandemic and this man has lived in the country for 14 years contributing to his community during that time. It is inhumane to deport someone after 14 years of living somewhere,” she said.

Ms Whitmore said that her constituent and many others “are being caught in this limbo land between an old system that we all agree is not fit for purpose and the Government has committed to reform and those reforms being formalised and being put in place.”

Mr Martin said that “while wanting to retain the capacity in terms of threat to national security or other factors, we would have a stay on deportations”.

Since March just four people have been deported although 469 deportation orders have been issued and three of them were issued before the start of the pandemic.

Later speaking in the Seanad Minister for Justice Helen McEntee said she had asked officials to review the issuing letters of refusal to stay in the State and letters with deportation orders.

None had been issued to those in the international protection process since the start of Level 5 restrictions.

And no deportations had occurred since March for people who were unsuccessful in their application for international protection in the State.

Ms McEntee added that “to those who may have received Deportation Orders since the start of the pandemic but before this review, rest assured that we will continue our pragmatic approach throughout Covid-19”.

The Minister also urged anyone in the State “regardless of their current status” to come forward to receive a Covid-19 vaccine when it is made available to them.

About 160 undocumented migrants are believed to work in the health service and the Minister gave a commitment in the Seanad that “no information gathered as part of that process will be passed to the immigration authorities”.

The Minister was speaking during debate on a Bill introduced by the Civil Engagement group of Independent Senators calling for a moratorium on deportations and deportation orders for the duration of the pandemic.

“I believe the low number of deportations since March reflects the discretionary approach which I am applying on administrative basis is working effectively,” she said.

She also stressed that “we will continue the pragmatic compassionate approach shown by the Department of Justice and the Garda National Immigration Bureau since the onset of the pandemic”.

The Minister also gave some details of her plan to implement a scheme to provide a “pathway to legal residency, and ultimately to the privilege of citizenship”, for up to 17,000 undocumented including 3,000 children.

Ms McEntee said referred to the “huge efforts to regularise the status of undocumented Irish immigrants in other countries, particularly the United States.

“As a country, we have asked for generosity, and have received such generosity, for many years from other countries which welcomed Irish people to their shore.

“I believe it is our moral duty to treat those from elsewhere who seek to make Ireland their home with the same generosity and understanding others have shown to us.”

She said the scheme will allow long-term undocumented persons to apply for an immigration permission and “ the most straightforward option is to adopt a programme which would apply under the Minister for Justice’s executive power.

A similar approach was taken when some 2,200 English language students were allowed to stay under a special scheme.