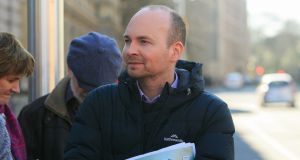 The challenge of how to compete with Sinn Féin for left wing votes is at the centre of differences in political strategy between leading members of the Socialist Party.

In explaining the united front approach, Mr Murphy cites a definition from the “Executive Committee of the Communist International Theses on the United Front”.

By this definition, the tactic is “nothing other than the proposal made by the Communists to all workers, whether they are members of other parties or groups or of none, to fight alongside them, to defend the elementary and vital interests of the working class against the bourgeoisie.

“Every action for even the smallest demand is a source of revolutionary education, because the experience of combat will convince the working people of the necessity of the revolution, and will demonstrate the meaning of Communism to them.”

He says this can be “applied to today’s situation to win over workers looking towards other organisations”.

Mr Murphy also cites Trotsky in expanding his argument, adding: “Trotsky made it clear that even in a specific united front, there was a need for clear differentiation from other forces.”

He then quotes Trotsky thus: “No common platform with the Social Democracy, or with the leaders of the German trade unions, no common publications, banners, placards! March separately, but strike together! Agree only how to strike, whom to strike and when to strike! Such an agreement can be concluded even with the devil himself, with his grandmother, and even with Noske and Grezesinsky. On one condition, not to bind one’s hands.”

In effect, Mr Murphy says this would allow Socialists join in common action with others “in order to achieve real gains for the working class” while maintaining their own independence as the “revolutionary” party.

“The united front method also means revolutionaries fight in that movement to expose the limitations of the other organisations and ideas, to prove the superiority of revolutionary ideas and seek to win a majority to a revolutionary programme and the leadership of the revolutionary party.”

An example of how this was applied, according to Mr Murphy, came during the Dublin South West byelection in 2014. It saw Mr Murphy beat Sinn Féin, who had been expected to take the Dáil seat, on the back of an anti-water charges ticket. His victory is widely credited with pushing Sinn Féin and then Fianna Fáil towards a position in favour of abolishing water charges.

Sinn Féin did not initially favour of non-payment of the charges, as the Socialists had.

“Here, a very critical and ‘hard’ approach was taken to Sinn Féin, on the concrete issue of water charges to illustrate in practice the weaknesses of their programme and approach, and win over their supporters,” Mr Murphy says.

“A consistent element of our campaign was appealing to Sinn Féin supporters to vote for us to apply pressure on Sinn Féin ’to change their position’ and ‘join with us in campaigning to build a mass movement of non-payment’.

“In the election leaflet the comrades themselves quote, it clearly says: ‘The election of Paul Murphy would make it clear to Sinn Féin that a weak position on Water Charges in the future will not be tolerated’.

“This was a theme running through much of our election posters, leaflets and other material.

The byelection is also used in a paper from others in the movement, replying to similar arguments that had been previously made by Mr Murphy. This paper, is called: “A brief contribution on some political issues mentioned by PM” and is written by Laura F, Stephen B, Kevin M, Joe H, and dated October 10th last.

The authors are understood to be Laura Fitzgerald, Stephen Boyd, Kevin McLoughlin and Joe Higgins.

“We should be hesitant about using labels if they don’t accurately convey what we mean,” they say. “We don’t have the time to go into more generally, but will use the example DSW By-Election just given to try to illustrate the difficulty with the term.

“There was no question of a unified approach with Sinn Féin on the water charges. There was obviously an attempt by us to win over people who voted for them by using the water charges and austerity issues, but there is a major difference in the content and tone of our campaign.”

Differences also emerge between Mr Murphy and his colleagues on how to describe Sinn Féin.

Mr Murphy says: “The comrades…respond to my description of Sinn Féin as a nationalist, pro-capitalist party saying the following: ‘Of course they are “nationalist, pro-capitalist party’, the reality is that Sinn Féin are a bourgeois nationalist party - but of fundamental importance to any political description of Sinn Féin is that they are a sectarian party. A party which currently plays a sectarian role in the North - whose armed wing in the past waged an individual terrorist armed struggle, that was overtly sectarian and at times directly targeted working class Protestants.”

Mr Murphy then adds further description is needed on the term “bourgeois nationalist party” the Socialist have used for Sinn Féin.

Mr Murphy also corrects his comrades on their understanding of the “united front”.

“The comrades begin with an inaccurate historical description of the united front as ‘tactics the Comintern and revolutionary parties adopted in general towards the mass organisations of the working class in the 1920s and 1930s’,” he says.

“I will deal below with the question of whether the united front is solely a tactic or a method, or both. Nonetheless, the history is clear. The united front did not originate in the 1920s as seems to be implied [by others].

“It was in fact central to the success of the Bolsheviks in 1917, and was fought for by Lenin in particular. The most well known example is the united front struggle proposed by the Bolsheviks to stop the Kornilov coup against the Kerensky government in August 1917, using ‘Kerensky as a gun-rest to shoot Kornilov.’

“It wasn’t until later, in particular at the Third and Fourth Congresses of the Communist International in the early 1920s, that the united front was theorised. The same process took place with the transitional method and the workers’ government slogan, both of which were implemented by the Bolsheviks in 1917, for example in Lenin’s ‘The Impending Catastrophe and How to Fight It’, and the ‘Down with the Ten Capitalist Ministers’ slogan demanding that the Mensheviks and SRs form a government without the participation of the capitalist parties.

“The comrades are unfortunately wrong to suggest that the united front was then adopted by the Communist Parties. In fact, the tragedy of the 1920s and 30s is precisely that it was not fully adopted or properly implemented.”