The Green Party can improve on European and local election results 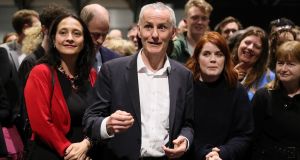 The Green wave, the Green tsunami, the Green surge: the headlines wrote themselves. Green Party candidates had their best ever day in an Irish election, topping polls everywhere with seats to spare, quadrupling their local authority seats, romping home in the European elections in Dublin and scrambling for seats in the other two constituencies.

As the weekend counted on, however, some of the early expectations would be unfulfilled. The RTÉ exit poll turned out to have rather overstated Green support; the Green surge was not quite as anticipated.

Still, it’s some result for the party. Seven years after all its TDs were thrown out by the voters, and three after two limped back into the Dáil to give it a foothold in national politics once more, the party has caught the zeitgeist of the age on climate change and charged into council chambers across the country.

Dublin, especially middle class Dublin, swung behind Green candidates en masse. In the Dublin City Council area, the party topped the poll in every electoral area south of the river (in one, Pembroke, their candidate Hazel Chu won more than two quotas); in Dun Laoghaire-Rathdown, it topped the poll in four of the six electoral areas. But it wasn’t just leafy south Dublin: there were poll toppers in Limerick city too, in Naas, in the Taoiseach’s backyard in Castleknock, in Wicklow.

Last night, the Green Party had 48 seats, with 36 yet to be filled, and had hopes of getting beyond 50. For a party that went in to the elections with 12 seats hoping to get to 25, it’s some result.

Sure, some of the vote may be a habitually disloyal one, given to sudden swings according to the fashion of the day. But it’s not just that. The Greens have succeeded in politically weaponising climate change, and climate change isn’t going away. With clever and honest communications, and smart political management, the Green vote could keep going up. Just look around Europe. At under six per cent in the locals, there is no reason this election should be the zenith of the Greens’ ambitions.

For the moment, watch Fianna Fáil and Fine Gael scramble to woo them. See Labour seeking to attach themselves to the party in a series of alliances. Suddenly everyone wants a piece of the Green magic.

Between the old rivals, things are hotting up ahead of a general election square-off that seems, thanks to the weekend’s results, more likely to come later rather than sooner.

Fianna Fáil had the better day of it in the local elections, Fine Gael – driven by stronger candidates and incumbency – is set to win hands down in the Euros. The European Parliament elections are important in their own right, of course, but it is the locals that most concern party managers, candidates and TDs preparing for the general elections.

Aside from maintaining its position as the largest party in local government, Fianna Fáil made strategic gains across Dublin, especially in the northside and outer suburban constituencies where it can target seat gains.

Since the election of Leo Varadkar as Fine Gael leader, the assumption of many in his party – and many outside it – was that Fine Gael would again lead Fianna Fail in Dáil seats after the next election, putting him in pole position to retain the Taoiseach’s office. The results of these elections suggest that assumption should be revised. The two parties will now go head to head from a position of more or less equality. Looking forward to the formation of the next government, that is a pretty important development.

The other big trend of these elections was the collapse of the Sinn Féin vote. As the army of party activists watched horrified, it emerged all over the country – including across its heartland in the working class districts of Dublin, in Limerick, where the vote cratered, in Galway, where one of the rising stars Maireád Farrell failed to take a seat, and so on, and so on. For the party’s dejected loyalists, the devil is there in the detail. It is the most devastating electoral blow to the party since it began to take electoral politics seriously and it will require a well thought-out and far-reaching response.

The Labour Party did not see the revival it hoped for – too many votes went to the Greens for that – but it did see some reason for hope, grafting out strong performances in places like Dublin and Louth. Yes, the Euros were a bit of a flop, but the party beat the Greens share of the vote nationally in the locals and beat Sinn Féin in places that will encourage Labour’s foot soldiers. It’s not a comeback, yet; but it might be a sign that one is possible.

The smaller parties, as ever, had mixed fortunes. People Before Profit and Solidarity had a difficult day, while Peadar Tóibín’s Aontu party marked its entry to national politics with three seats. Independent dynasties did what they usually do. The Social Democrats had a reasonable outing. The multi-coloured map of Irish elections has various shades of red, pink and purple. But it was a Green day for sure.