Government to proceed with plan for directly elected Limerick mayor 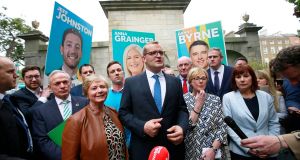 John Paul Phelan (centre): Government would decide “in the next couple of weeks” on a citizens’ assembly. Photograph: Nick Bradshaw/The Irish Times

The Government will proceed with plans for a directly elected mayor in Limerick after a majority of voters backed the proposal, Minister of State for Local Government John Paul Phelan has confirmed.

Mr Phelan told the Dáil: “Limerick itself will be the test ground for the establishment of the position of directly elected mayor.”

Cork and Waterford voters rejected a similar proposal but the Minister said 360 votes would have swung the result in those cities. He told the House that “the issue of directly elected mayors for Cork and Waterford has not gone off the agenda at all”.

He said the Government would decide “in the next couple of weeks” on a citizens’ assembly for Dublin and added that the matter would be revisited in Cork and Waterford in the near future.

He and his officials will on Wednesday meet members of the civil society group from Limerick who supported the plebiscite. And the city “will be the leader in this area of local government reform”, he added.

Labour leader Brendan Howlin said Limerick voted by a “slim majority” in favour of a directly elected mayor while “Cork and Waterford voted by an equally slim majority to reject it”.

Mr Phelan described the almost 4,000 votes in favour of the proposal as “quite a convincing majority”.

When Mr Howlin pointed out that it was 52 per cent, Mr Phelan replied that it was down to a difference of 720 or 730 votes in Cork and Waterford and “360 votes would have swung the result”.

The Labour leader said most TDs saw the potential of directly-elected mayors and “what they can bring to a reformed and invigorated local government system”.

He asked if a wider citizens’ assembly for Dublin would be widened for other areas or if a separate assembly would be held.

“That would allow us to develop a strong, coherent model” and people would understand the powers they wanted to devolve and the relationship between the mayor and executive.

Sinn Féin Limerick TD Maurice Quinlivan criticised the lack of information provided by the Government on the issue and said he had no doubt this contributed to a positive proposal failing in Waterford and Cork.

He said his party “had a job or work to explain to people the benefits of having that position”, in Limerick and he asked when the legislation would be introduced.

The Minister said they would proceed “as soon as possible” and meet the civil society group in Limerick on Wednesday. This city will be the “leader in local government reform”.