Over 380,000 entitled to vote in directly elected mayor plebiscites 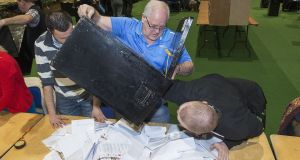 More than 380,000 people will be entitled to vote in separate plebiscites on creating directly elected mayor positions in Cork city, Waterford and Limerick next month.

The plebiscites will take place on Friday, May 24th as the State goes to the polls for the local and European elections and a referendum on changing divorce laws. The polls will be open between 7am and 10pm.

The Government is proposing creating three directly elected mayor positions for Cork city, Limerick city and county, and Waterford city and county. If approved, the office holders would assume most of the current powers of the local authority chief executive which would be combined with the ceremonial duties of existing mayors. The office holders would receive the same salary as minister of state - €129,854.

The Department of Local Government on Thursday said the electorate currently stands at some 149,000 people in Cork City, 147,000 in Limerick city and county and 85,000 in Waterford city and county.

Minister for Local Government Eoghan Murphy urged people to come out and vote “whatever your views are on the proposal”.

People can check if they are registered to vote at www.checktheregister.ie and eligible voters who are not can download an application form from the website or obtain one from their local authority. Completed forms must be received by the local authorities by May 7th.