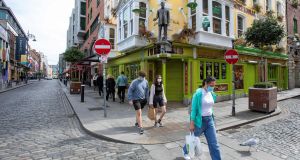 More than 150,000 people are in receipt of the pandemic unemployment payment. Photograph: Paul Faith / AFP via Getty Images

The Government will consider reversing cuts to the pandemic unemployment payment implemented on Tuesday as it prepares for the budget in three weeks.

Senior Government sources familiar with budgetary discussions under way behind closed doors say that Ministers will give consideration to restoration of the pandemic unemployment payment (PUP) to the full rate of €350 per week, though no decision is likely until closer to budget day.

The first budget of the coalition Government is due to be delivered in three weeks on Tuesday, October 13th. The Government believes that up to €9 billion will be needed to deal with the impact of the Covid-19 pandemic next year. Minister for Public Expenditure Michael McGrath said on Tuesday night he is also earmarking about €900 million in additional spending in the Budget next month.

Ministers were briefed by Mr McGrath at Tuesday’s Cabinet meeting, and detailed discussions with the spending departments will take place in the coming weeks.

A huge increase in borrowing is inevitable to deal with the costs of the pandemic and some Ministers wonder if the Government should take the political pain of cuts to the Covid-19 payment when resources are available, albeit through borrowing.

Sources say that when the Department of Finance prepared plans for “tapering” the special pandemic payments, it was expected the economy would be reopening. But now parts of the economy are closing down again to contain the second wave of the virus.

“This is not what was anticipated,” said one source. “You have to look again.”

It is understood there have been some informal discussions on restoring the full rate of the pandemic unemployment payment for sectors which are closed by Government order such as pubs and arts/culture. But Ministers also wonder if it is possible to pay different rates to different sectors. And on Tuesday night in the Dáil, Minister for Social Protection Heather Humphreys ruled out restoring rates for workers in the entertainment sector saying it would be unfair to those working in other industries.

Under a plan announced during the summer, the payment was reduced yesterday from €350 a week to between €200 and €300, depending on income before the pandemic. More than 150,000 people are in receipt of the payment.

Opposition parties have called on the Government to reverse the cuts, and Sinn Féin leader Mary Lou McDonald contrasted the cuts yesterday with the announcement by the Government to hire special advisers for 10 Ministers of State.