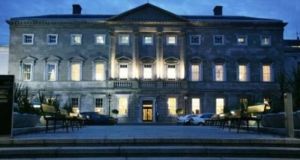 While the defeats are an embarrassment for the Government it is not obliged to act on the result of the measures introduced by Opposition parties.

The Government has suffered three defeats in the last votes of the year in the Dáil on a smoky coal ban, pension protection legislation and pay restoration for workers in not-for-profit disability service organisations.

While the defeats are an embarrassment for the Government it is not obliged to act on the result of the measures introduced by Opposition parties.

A Government amendment to block a Labour Party demand that a ban on smoky coal be introduced nationwide was defeated by 76 votes to 38.

Taoiseach Leo Varadkar has repeatedly told the Dáil the Government could not introduce the ban because of the threat of legal action by coal distributors who claim turf and wood are more damaging to the environment.

The State plans to extend the ban to 13 more towns with populations of between 10,000 and 15,000 from September next year. The ban is currently in place in Dublin and 25 large towns.

In a second vote the Government was outnumbered by 77 to 37 on the Labour Party’s legislation to protect employees on defined benefit pensions.

The Dáil vote for the Pensions (Amendment) (No 3) Bill to go to committee stage. The Bill was first introduced in 2017 by Mullingar TD Willie Penrose but private members’ legislation is subject to a lottery system and only came up for debate this month.

Mr Penrose said the Bill aimed to clamp down on the practice of large companies “walking away from their pension obligations to employees” and winding down defined benefit schemes.

He drafted the legislation after Independent News & Media decided to wind down its defined benefit pension. At the time more than 100,000 workers were involved in some 700 such schemes.

In the third vote a Sinn Féin motion calling on the Government to restore full pay and pension entitlements to workers in the not for profit disability service sector, was accepted by 76 to 38 votes.