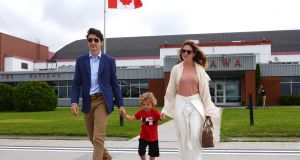 Canadian prime minister Justin Trudeau arrives in Dublin on Monday for a brief official visit which will see him hold meetings with Taoiseach Leo Varadkar and President Michael D Higgins.

Mr Trudeau has a series of official engagements on Tuesday culminating in an official dinner in Dublin Castle in the evening.

He is due to arrive in Dublin Airport on a flight from Ottowa on Monday evening accompanied by his wife Sophie Gregoire-Trudeau and their young son Hadrien. The family are staying at Farmleigh House in the Phoenix Park.

Mr Trudeau will meet the Taoiseach on Tuesday morning at Farmleigh where the two leaders are expected to discuss trade issues and the progress of CETA, the trade agreement between Canada and the EU.

The free trade agreement, which has been negotiated by the Canadians and the EU, has yet to be ratified by national parliaments and is being opposed in Ireland by a coalition of trade unions, farmers’ groups and NGOs.

Mr Trudeau is a strong supporter of the deal and when the former taoiseach Enda Kenny visited Canada recently, he was praised by Mr Trudeau for his support for the agreement.

The two leaders are also likely to discuss climate change, personal liberty around the world and the cultural ties between Ireland and Canada, aides said.

Mr Varadkar has identified his brand of politics as having much in common with Mr Trudeau’s liberal centrism, and the two men – Mr Varadkar is 38, Mr Trudeau 45 – are among the world’s youngest leaders.

Mr Trudeau led the celebrations for the 150th anniversary of the founding of the Canadian confederation over the weekend.

According to a statement from Government Buildings, Mr Trudeau “is the Taoiseach’s first international visitor and this will be their first meeting. The bilateral meeting will discuss the close ties between Ireland and Canada, and how to build on this through trade and multilateralism.

“The Taoiseach will emphasise the role that Irish people have played in developing Canada and in particular Mr Trudeau’s hometown of Montreal.”

After a meeting with Mr Varadkar and a press conference at Farmleigh in the morning, Mr Trudeau will meet children attending a GAA summer camp in the grounds of the estate.

He will then attend a business round table hosted by the Tánaiste Frances Fitzgerald and Enterprise Ireland chief executive Julie Sinnamon in the city centre.

Mr Trudeau will then attend a Famine and emigration-themed commemoration before travelling to Áras an Uachtaráin for a meeting with President Michael D Higgins.

Later in the evening, the Taoiseach will host an official dinner for Mr Trudeau at Dublin Castle.

Mr Trudeau is scheduled to leave Ireland early on Wednesday morning for Edinburgh where he will meet with Queen Elizabeth, who is Canada’s head of state. Mr Trudeau previously met the queen as a small child when his father, Pierre, was Canadian prime minister.

Later in the week he will travel to the meeting of G20 leaders in Hamburg.

1 No obvious signs of injury on remains of McGinley children
2 Patient advocate on HSE board resigns in protest at ‘tokenistic’ treatment
3 Fine Gael to stress economic warnings as campaign enters crucial week
4 Plenty of politicians’ promises, but what about these ideas to help consumers?
5 Coronavirus: death toll rises to 81 with nearly 3,000 confirmed cases
Real news has value SUBSCRIBE