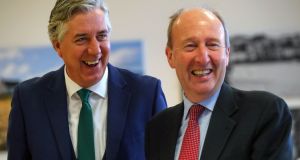 Serious questions have been raised about governance and financial controls in the Football Association of Ireland (FAI), Minister for Sport Shane Ross has told the Dáil.

He said Sport Ireland, the agency with responsibility for funding and oversight of sporting bodies, would “seek clarifications” from the FAI about the loan given by former FAI chief executive John Delaney to the organisation.

Mr Ross said Sport Ireland would then give him a report on those clarifications, and he will publish it and answer any questions arising.

In his first remarks on the controversy at the organisation, which received more than €2.9 million in State funding last year, Mr Ross said he could not comment on the issue while the process was ongoing.

“In the interest of due process and natural justice” the necessary time should be given for clarification, he said.

Mr Ross was responding to Fine Gael TD Noel Rock, who called for a “truly independent investigation” into the organisation. He said this should look at lease deals, associated companies, board room expenses and all financial, management and corporate governance issues in the FAI.

Mr Rock said the process under which Mr Delaney was appointed to a new role of executive vice president by a unanimous decision of the board “absolutely stinks”. He said corporate governance at the association was “shambolic” as he raised his concerns in the Dáil.

Mr Rock asked if the a €100,000 loan provided by Mr Delaney to the FAI in 2017 was the only undeclared loan to the sports body.

He said that six weeks ago Jonathan Hall Associates was appointed to provide a report on senior management structures and the role of chief executive as the FAI planned for the launch of a new strategic report.

No terms of reference for this report have been published and the FAI has not responded to the Oireachtas sports committee, which is looking for a copy of it.

“Incredibly within six weeks that report was produced in its entirety - no redrafting required - and the contents acted on by a unanimous vote of the board culminating in the new announcement of a new position for John Delaney.”

He said such a review would normally take a year and asked why the FAI could not provide the committee with the report when it had already been acted on.

Mr Rock asked the Minister if he believed it was good corporate governance to operate in this way and if Mr Ross thought taxpayers’ money was being deployed effectively to the FAI.

He said he was “disturbed” by the information he was receiving about the FAI and action was needed now. “If the FAI won’t clean up their own house then we should at least work to protect the taxpayer”.

“The board of the FAI is now only existing on borrowed time,” he added.

Mr Ross said Sport Ireland was seeking clarifications from the FAI on all these issues. He said the FAI, IRFU and GAA are audited by Sport Ireland’s internal auditors every three years. The FAI was audited most recently in 2016 and there will be a further audit later this year

Lives on hold: How coronavirus has affected the women porters of Melilla