Brexit: Varadkar ‘confident’ there will be a deal

Ireland will be ‘as ready as we can’ for no deal, Simon Coveney says 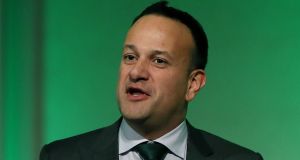 ‘We need to see what happens in Westminster over the coming days and weeks,’ Leo Varadkar said. Photograph: Photo: Brian Lawless/PA Wire

Taoiseach Leo Varadkar has said he still thinks there will be successful deal on Brexit notwithstanding the pessimism over its likelihood being expressed in Brussels and Westminster.

“I’m still confident we will have a deal. As everyday passes no deal becomes more likely and that is just a statement of the fact,” he said.

“We are intensifying our No Deal preparations. They have been very much underway now for months if not years. They are being intensified at the moment.

“We need to see what happens in Westminster over the coming days and weeks,” he said.

On Monday the European Union officials said it believes that a no-deal Brexit is “increasingly likely”.

The news came after the EU gave Britain two more weeks to solve its political stalemate, although there is widespread doubt this will be achieved.

Should a no deal Brexit come, Ireland will be “as ready as we can be” Minister for Foreign Affairs Simon Coveney has said.

Asked about the EU’s comments, the Tánaiste said: “That’s because we don’t have a solution and we only have a few weeks to go to the new deadlines that have been set.

“We have been intensifying our no deal planning for many weeks now - should it come to that, we will be as ready as we can be - we have passed legislation, we have put significant financial resources in place that will be triggered in the context of a no deal so that we can protect vulnerable sectors and work with them through a very disruptive and difficult period.

“But of course, we are continuing to focus on getting political solutions but we can’t do that on our own with the EU side, the British parliament and the British government have to find a way of voting for something as opposed to just voting against things,” he told reporters at Cork Airport.

“The only certainty that is left to deliver on this stage has to be delivered from Westminster, not from Dublin, not from Brussels.”

Mr Coveney said the EU and the Irish Government have been consistent in their approach for many months.

“It is Westminster where the crisis is and it is Westminster that has to deliver the solutions to that crisis and I think we will hopefully get some more clarity today from the British prime minister as to how she intends to that this week,” Mr Coveney said.

Mr Coveney said there was a “a strong majority in Westminster that do not want to see a no deal Brexit - it’s damaging and very negative for everybody involved including Ireland and the UK”.

Fianna Fáil’s spokeswoman on Brexit Lisa Chambers TD has called on the Government to clarity its plans to avoid a hard border in the event of the UK crashing out of the EU without an agreement.

Ms Chambers said the Government “need to be more transparent with the public” about their plans to maintain an open border if a no-deal Brexit comes to pass.

“It is clear that discussions are being had but when questioned on this issue the Government continue to trot out vague and ambiguous statements that shed no light on this matter,” she said.

Earlier Minister for Finance Paschal Donohoe said Anglo-Irish relations have been put under strain by Brexit and will continue to be strained in the future.

Mr Donohoe said he believes an orderly Brexit is still likely, but acknowledged that a no deal Brexit could cost 50,000 jobs in the next few years.

“The economy will still grow, just at a slower pace,” he told RTÉ radio’s Today with Sean O’Rourke show.

The Government has in place a range of measures to support Irish business and agriculture, he added.

At the moment “the books are balanced” he said. A no deal Brexit could mean a deficit of 0.2 per cent which could rise to 0.5 per cent next year. State borrowing to facilitate a 0.5 per cent deficit could mean borrowings of between €1.5 billion and €1.8 billion, he explained.

“What we do depends on the nature of the no deal.”

Mr Donohoe said that he still intends to continue investment of €1.5 billion in the rainy day fund this year.

“If there is a disorderly scenario, we will explore all our options including using the rainy day fund.”

Mr Donohoe said that in the event of an orderly exit, it is important to ensure that the country has a tax code where someone who is on an average wage is not paying higher tax.

He also defended plans for the indexation of pensions (linked to inflation), saying this could give clarity and security to people rather than waiting until “the last minute” to find out increases.

“Regina [DOHERTY]is right to want to give security to people. Pensioners want to know where they stand.”

At the weekend Minister for Social Protection Regina Doherty said she intends linking payments such as the pension to the consumer price index (CPI) this year. Ms Doherty said all the non-governmental organisations (NGOs) in her sector are in favour of such a move.

He also said that personally he did not support DUP MP Jeffrey Donaldson’s call for Ireland to rejoin the Commonwealth.

Speaking at the Fine Gael national conference at the weekend. Mr Donaldson said: “The Commonwealth is a place where Ireland’s voice should be heard and I would like to see that happen.”

The MP noted that there was a danger that Brexit will put up more “scaffolding” around the Belfast Agreement.