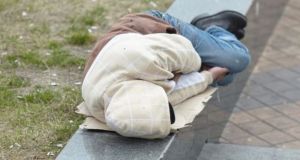 More than 10,000 people are living in emergency accommodation

Far more families and individuals are entering homelessness than anyone predicted, Tánaiste Simon Coveney said in the Dáil on Thursday.

Mr Coveney faced a barrage of criticism as, for the first time, more than 10,000 people are living in emergency accommodation.

Fianna Fáil deputy leader Dara Calleary said there were now almost 4,000 more people in homelessness than when the Government unveiled its Rebuilding Ireland programme in 2016.

He told the Dáil there was “huge sadness and anger” over the record number of 6,480 adults and 3,784 children in emergency accommodation.

The figures have been “massaged and managed” to keep them as low as possible, but they were still at record level, and the Government plan was “based on spin and no substance”.

He said the UN special rapporteur had also “hammered your policies, in particular allowing vulture funds to buy properties and then rent them at high rates”.

Mr Coveney acknowledged there were “far, far too many individuals, families and children who are homeless in Ireland today”.

But he said that 5,135 individuals exited homelessness into independent tenancies last year – an increase of 8 per cent on the previous year and a record level of exits from homelessness in a calendar year.

However, “there are more families and individuals coming into homelessness than any of us in this House predicted”.

He said Minister for Housing Eoghan Murphy would be bringing proposals to Cabinet next week aimed at protecting tenancies.

“Well it might be working for some Tánaiste, for the landlords, the vulture funds, for the property speculators, but it is certainly not working for the ordinary people that you’re supposed to protect.”

Mr Doherty claimed on RTÉ radio on Thursday morning that Mr Murphy accused interviewer Bryan Dobson of “asking ideological questions when he was asked to defend the Government’s abysmal record in relation to construction of social homes”.

Mr Coveney said that if they wanted to have a serious debate about housing “well then let’s stop the Punch and Judy show here trying to accuse people here of ideological positions. There’s no ideology when it comes to housing on this side of the House”.

People Before Profit TD Richard Boyd Barrett asked if the Government was ashamed of its record, given the number of children in emergency accommodation since Fine Gael entered office in 2016 had risen by 247 per cent.

There were 470 per cent more children in homelessness since Fine Gael entered Government in 2011, he said.

He said the lives of the children in homelessness “will be irredeemably scarred and marked by the experience of living in emergency accommodation”.

Profits had risen hugely for the “landlords that you sold vast amounts of properties [to] through Nama” and “the people you invited in ... don’t even pay any tax because of the loopholes” in the law.

The Tánaiste said that through the Rebuilding Ireland programme the Government is taking more individuals and families out of homelessness than ever before but that they had not overtaken the number going into homelessness.

1 ‘We are worried’: Taoiseach warns plan to reopen all pubs on July 20th may be delayed
2 Man (21) charged over shots fired at gardaí in Cork
3 Judge dismisses €60,000 claim over boy (3) who cut his lip in fall
4 Cabinet extends advice to avoid non essential travel until July 20th
5 Minister for Children condemns ‘homophobic’ attacks from ‘far-right’
Real news has value SUBSCRIBE