April 17th, 2019: US speaker of the House of Representatives Nancy Pelosi addresses the Dáil, saying that there will be "no chance" of a US-UK trade deal should Brexit undermine the Belfast Agreement. Video: Oireachtas TV 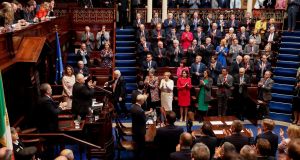 Nothing must happen to imperil the Belfast Agreement and the seamless Border between Ireland and Northern Ireland, US speaker of the House of Representatives Nancy Pelosi has said.

She told the Dáil the Belfast Agreement should be treasured, not only because of what it has meant for Ireland and Northern Ireland but because it had become a beacon of hope for all the world.

A lengthy standing ovation greeted Ms Pelosi when she entered the Dáil chamber to address TDs, Senators and former members of the Oireachtas, along with a large delegation from the US House of Representatives.

Ms Pelosi repeated her warning that “if the Brexit deal undermines the accord there will be no chance of a US-UK agreement” on trade.

“I say that hopefully, that we will not have to face that reality.”

She told a full Dáil chamber that “as you face the challenges posed by Brexit, know that the Democrats and Republics in the House stand with you”.

To sustained applause, she said: “We must ensure that nothing happens in the Brexit discussions that imperils the Good Friday Accord, including but not limited to the seamless Border between the Irish Republic and Northern Ireland.”

She said children born in 1998, when the Belfast Agreement was signed, had grown up in peace. “We cannot jeopardise that,” she continued. “We must not and will not allow that progress to be undermined.” Of Good Friday 1998, she said: “On that holy day the world saw the dawn of peace in Ireland.”

Ms Pelosi also made reference to a photo she had seen of former Ulster Unionist leader David Trimble and Mr Hume at a U2 concert in 1998 after the peace agreement had been signed.

She referred to U2’s Bono, who with his wife Ali Hewson sat in the distinguished visitors’ gallery, as “one of Ireland’s most beloved exports”, while paying tribute to his music and campaigning work.

Ms Pelosi said she had heard “excellent arguments” for Ireland to sit on the UN Security Council as she highlighted Ireland’s efforts in 1961 at the UN to push for non-proliferation of nuclear armament.

She also praised Ireland’s efforts on green technology, adding that both Ireland and the US could do more on climate change and could do so together. Both countries “must do better and must to more and can to it together” with the urgency the issue demands.

Ms Pelosi was addressing current and former members of the Dáil and Seanad in an event marking the centenary of the first Dáil.

She introduced senior members of the House of Representatives in her address after former Taoiseach Enda Kenny welcomed them at the entrance to the chamber.

The speaker praised Ireland as a modern nation, being the first in the world to vote by referendum for same-sex marriage, and also cited the backing of women’s reproductive rights on abortion.

She said that “from a crucible of deprivation and sadness” Ireland had “blossomed”, and while being one of the world’s youngest nations, the country enjoyed d one of the oldest cultures.

She mentioned of one of her meetings with Taoiseach Leo Varadkar in Washington when she offered him a tour of Capital Hill “by the Speaker”, but Mr Varadkar, who had interned on the Hill as a student, replied “Ma’am I used to give that tour”.

Ms Pelosi said Ireland had been a thread “in the fabric” of American history and life, in an address that contained a major focus on the relationship between the State and the US.

Ireland and the US “know the joy of independence” she added. Both countries had endured the trauma of civil war and the “satisfaction of rebuilding our nations”.

He said that 100 years ago, 27 men gathered in the first Dáil and were “practical idealists”. For women, on the Dáil centenary, he added, many glass ceilings remained to the shattered, and the vote for women in 1919 was “fought for and won with tenacity and bravery rather than given freely”.