US-Irish relations ‘even more important’ in wake of Brexit 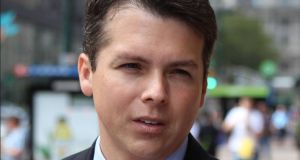 Brendan Boyle warned the Belfast Agreement could not become ‘collateral damage’ from the UK’s decision to pull out of the EU. Photograph: Facebook

US-Irish relations are set to become even more important in the wake of Brexit, US congressman Brendan Boyle has said.

The Democrat, who is on a US congressional delegation visit to Britain, Germany and Ireland, also warned the Belfast Agreement could not become “collateral damage” from the UK’s decision to pull out of the EU.

US House of Representatives speaker Nancy Pelosi, America’s third-most powerful politician who is among the delegation, has already cautioned Britain there would be “no chance whatsoever” of a US-UK trade deal if the Irish peace process is damaged.

Mr Boyle said the powerful ways and means committee in the US House of Representatives would veto any trade deal in the event of any negative impact to Ireland from the “entire Brexit saga”.

“With the exception of the speaker of the House Nancy Pelosi, all of us on this trip are in fact members of the House ways and means committee,” he said.

“It is through our committee that any trade deal must pass. We have jurisdiction over that. So I think that adds an extra layer of credibility when we are able to come to London and express how strongly we feel about the Good Friday Agreement.”

Mr Boyle, the son of an emigrant from Glencolmcille in the Donegal Gaeltacht, said Ms Pelosi has led a series of meetings with senior British politicians – including chancellor of the exchequer Philip Hammond – in recent days “with one clear, unambiguous message”.

That message was “that any damage that is done to the Good Friday Agreement would be a problem in terms of relationships with the United States as well,” he said.

Mr Boyle added: “That is how strongly we feel about the Irish peace process, our role in it in the 1990s and our role continuing today.”

Mr Boyle said the delegation has been “crystal clear” that doing a trade deal with the the US is “rather challenging” amid the current “trade sceptical environment”.

“But if you add on to that any sort of backsliding on the Good Friday Agreement, any future US-UK free trade deal would just prove impossible to achieve,” he told RTÉ radio.

Mr Boyle said Brexit is the chief reason for the European trip, but as they arrived in Dublin he added the delegation also wanted to celebrate the 100th anniversary of the first Dáil and to recognise the importance of the US-Irish relationship.

“I think with the UK leaving the European Union, the US-Irish relationship takes on even more importance,” he said.