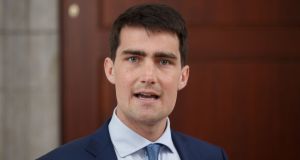 Accusing the Government of sitting on its hands as RTÉ’s problems worsened, Jack Chambers warned that delaying reform of the TV licence system for five years would ensure a continuing decline in public service media. Photograph:Fran Veale/The Irish Times

There is “no hope at all” for RTÉ if Government plans to save it include the broadcasting of death notices, the Dáil has been told.

Fianna Fáil TD Jack Chambers hit out at the Government’s approach to the challenges facing the national broadcaster following its plan to impose stringent cuts to save €60 million over three years.

The Dublin West TD derided a suggestion last week by Minister of State Patrick O’Donovan that RTÉ broadcast death notices in its remit as a public service broadcaster.

“If that is the Government’s policy for saving the national broadcaster, I fear there is no hope at all,” he said.

Accusing the Government of sitting on its hands as RTÉ’s problems worsened, he warned that delaying reform of the TV licence system for five years would ensure a continuing decline in public service media.

Speaking during a debate on the financial challenges facing RTÉ and its revised five-year strategy, Mr Chambers said there had never been a greater need for a strong independent media in an era of fake news and information.

He said that without State funding and reform Ireland is heading in the direction of the “outrageous, right-wing shock-jock journalism culture” that thrives in the US.

Opening the debate, Minister for Communications Richard Bruton re-iterated that up to five years were needed to develop a new broadcast charge to replace the licence fee, which was no longer appropriate with a 13 per cent evasion rate.

In the interim, collection would be put out to tender with the aim of cutting the evasion rate to 7 per cent similar to the rate in other countries.

Mr Bruton said RTÉ had not been able to increase its non-licence revenue over the past five years and was last in profit in 2013/2014.

The fundamental change in the way people consumed media was the source of the broadcaster’s difficulties.

The Minister welcomed RTÉ’s restructuring plans although he acknowledged that the leaking of the proposals left a bad taste for staff who learned of the cuts through an Irish Times report.

Fianna Fáil arts spokeswoman Niamh Smyth hit out at the plan to move Lyric FM from its Limerick studio to Cork and Dublin. She called for an explanation as to why RTÉ at first ignored and then rejected, when it became public, the “visionary” offer by the University of Limerick to offer the radio station a home on the campus.

Sinn Féin’s David Cullinane said the debate on reforming and examining public service broadcasting was bigger than RTÉ and had to include local radio and other forms of media.

He said there were “class issues” in RTÉ’s coverage and he did not believe it reflected modern Ireland. It reflected a couple of postcodes in Dublin, he said but usually only negative stories of working-class communities.

The party’s Limerick TD Maurice Quinlivan said “hardly anybody” in his constituency listened to RTÉ radio discussions on Saturdays and Sundays “because they do not raise the issues which affect them”.

Labour’s Limerick TD Jan O’Sullivan called on the Government to stop RTÉ’s “Dublin-centric plan” because moving Lyric FM services to Cork and Dublin went against the goals of Project Ireland 2040.

Ms O’Sullivan said all the positive developments in the broadcaster’s reforms including new content, live TV moments and new digital infrastructure were all centred at its Dublin headquarters.

“There is just no justification for taking Lyric FM out of Limerick,” she said.