Minister for Housing Eoghan Murphy survives vote of no confidence

Minister for Housing Eoghan Murphy has slammed Sinn Féin and Róisín Shortall of the Social Democrats for "hypocrisies" as he survives a motion of no confidence vote by 56 to 53. Video: Oireachtas TV 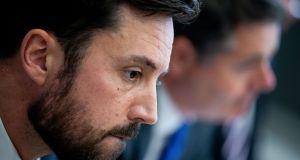 The Government is set for a majority of three in a Dáil motion of no confidence in Mr Murphy, according to latest estimates. Photo: Tom Honan for The Irish Times.

Minister for Housing Eoghan Murphy has survived a motion of no confidence by 56 votes to 53 with 35 abstentions.

Fianna Fáil abstained in the vote as part of the confidence and supply agreement.

The motion of no confidence in Mr Murphy was “never going to pass”, Taoiseach Leo Varadkar said in advance of the Dáil vote on the motion about the handling of the housing and homelessness crisis. “It was just a stunt to gain publicity,” Mr Varadkar said.

Speaking in defence of his party colleague who previously survived a motion of no confidence in September 2018, the Taoiseach said the housing crisis was not the responsibility of one Minister, one party or one ideology.

He said six Cabinet Ministers and three parties had had charge of housing and it was not the fault of any one party, minister or ideology but the economic crisis.

Hitting out at the Social Democrats who introduced the motion, he said the party’s co-leader Róisín Shortall had said the country “could not afford an election at Christmas” during a previous crisis when “false allegations” were made against then tánaiste Frances Fitzgerald.

The motion of no confidence came as the latest figures showed an increase of 117 people in homelessness to 10,514. The Taoiseach said the figures were “terrible” and “shameful” but he said 14,000 people had been lifted out of homelessness.

Social Democrats TD Catherine Murphy, who introduced the motion, said it was “morally and politically” the right thing to do. She told the Minister, “you have failed utterly in your job”, and he had to go.

She said the average rent in Dublin had risen 100 per cent since 2010 and in one part it was 125 per cent and the homelessness situation had got far worse. She said the housing assistance payment (Hap) is the single biggest transfer of public funds to private landlords in the history of the State and was being used to confuse numbers.

Rise TD Paul Murphy claimed the Government was relying on a “veritable rogues’ gallery” to maintain their “pro-landlord, pro-development policies”.

He said the Government was being supported in the motion by “liar and convicted tax cheat Michael Lowry” and “by a landlord who has used dog-whistling of a racist kind in order to distract from the true causes of the housing crisis, and the party of the big tent, Fianna Fail”.

He told the Minister that “you represent the same developers and landlords’ interests”. He said Mr Murphy had stood over an increase in total rent going to landlords from €5.5 billion a year in 2009 to €13 billion this year.

The Rise TD refused to withdraw his claims when called on to do so by Mr Lowry who subsequently make a personal statement in which he described Mr Murphy’s comments as “slanderous, malicious, vindictive” and false. He insisted he was not a convicted tax cheat or convicted tax dodger and the only mark against his reputation was that his company had filed an incorrect corporation tax return, which was incorrect because he had overpaid tax.

Independent TD Séamus Healy said the Minister had presided over the biggest homelessness crisis since the famine and he was part of an extreme free market, pro-rich Government. Mr Healy said the housing policy was damaging children, families and society.

He hit out at accusations that the crisis was down to “the ideology of my party”. He said that did not stand up to scrutiny.

Mr Murphy said they were engaged in the largest social housing programme in many decades and while it got off to a slow start “we’re making real measurable progress”.

Fianna Fáil housing spokesman Darragh O’Brien accused the Government of “trying to spread the blame” to other parties. His party colleague Pat Casey said they were at a “political groundhog day” and a Christmas election would not build any houses. He said “politicians need to deliver solutions and not waste time on political point-scoring”.

He said many TDs who have issued statements on housing had not bothered to attend 145 meetings of the housing committee. He said they had about 40 Dáil sitting days before the general election to work on solutions and to “get the Government to realise that rebuilding Ireland is not working”.

Newly elected Sinn Féin TD Mark Ward said the “normalisation of the housing crisis is not normal”. It was not normal to have 4,000 children spend another Christmas in emergency accommodation or for adult children to live in the back bedrooms of their parents’ homes or for three generations to live in the one house.

Mr Ward added that it was not normal for the continued failed policy of the Government to rely on the private market.