Ireland to contribute €8.8 million towards construction of solar power plant in Gaza 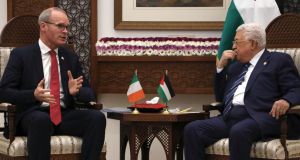 Minister for Foreign Affairs and Trade Simon Coveney and Palestinian president Mahmud Abbas at the Palestinian Authority headquarters in the West Bank city of Ramallah on Tuesday. Photograph: Abbas Momani/AFP

Tánaiste and Minister for Foreign Affairs and Trade Simon Coveney has announced an increase in Irish funding for the Palestinians.

Speaking in the northern Gaza Strip on the second day of a Middle East trip, he said Ireland will contribute €8.8 million in a joint construction project with France to build a 7.5mW solar power plant providing clean, reliable energy to the area’s wastewater treatment plant.

“Water pollution is the leading cause of child mortality in Gaza. Undrinkable water is keeping families poor, as they spend up to one third of their income buying water,” he said, speaking from the plant, where he met the head of the Palestinian Water Authority, minister Mazen Ghunaim. “Investments like this are critical to counter the ongoing humanitarian crisis in Gaza.”

During a visit to a school in the Jabalia refugee camp run by the United Nations refugee agency UNRWA, Mr Coveney also announced an extra €2.5 million in funding this year, bringing Ireland’s support to UNRWA in 2019 to €7.5 million.

Mr Coveney stressed Dublin’s ongoing commitment to the cash-strapped agency, which is facing a critical shortage of funds.

“I have seen at first hand today just how vital the provision of education and health care is in maintaining the hope, rights and dignity of refugees here in Gaza,” he said.

After talks with Israeli prime minister Binyamin Netanyahu in Jerusalem on Monday night, Mr Coveney spoke about the need for “new thinking” about the Israeli-Palestinian peace process, acknowledging that the realities on the ground have changed since the Oslo peace accords in the mid-1990s.

At the same time, he stressed that Dublin still sees a two-state solution as the only possible outcome.

“It’s got to be a negotiated solution, as opposed to an enforced solution on Palestinians because they’re in a weaker negotiating position, perhaps, than Israel is,” he said.

In an interview with Israel’s Kan public broadcaster, Mr Coveney, on his fourth visit to the region since he became Minister for Foreign Affairs, reiterated the Irish Government’s opposition to the Bill that would criminalise importing products produced on West Bank settlements. He denied that the Bill promoted by Senator Frances Black was anti-Israel but said that progress of the measure had been “effectively blocked”.

Reacting to Mr Coveney’s comments, a senior Israeli government minister welcomed what he labelled as a “shift in rhetoric”.

Tzachi Hanegbi, Israel’s minister for regional co-operation, who is viewed as a loyalist of Likud leader Mr Netanyahu, said he believed Irish policy on Israel was “not balanced” but he wanted bilateral relations to improve.

Mr Coveney’s comments were viewed in Israeli media as an acknowledgement from Ireland that the facts on the ground have changed since the signing of the Oslo accords, which have always been seen by the Irish Government as the basis of a peace deal.

Mr Hanegbi said “it is not only Ireland” in Europe whose policy is not “balanced” on Israel.

“It is time for new thinking between us and the Palestinians anyway,” said the Israeli minister. “If there is new rhetoric on this from the Irish Government, it is welcome.”