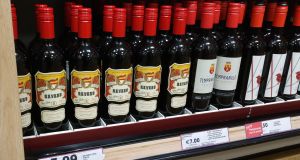 A compromise agreed after consultations in the past month will allow alcohol be displayed in three storage units or placed behind a barricade up to 1.5 metres high as part of provisions of the Bill. Photograph: Frank Miller

The drinks industry has sharply criticised Minister for Health Simon Harris for the measures he introduced on labelling and advertising in the controversial Public Health (Alcohol) Bill.

But as it the Bill was passed by the Seanad on Friday, he was praised by health advocates, who urged him to process it through the Dáil early in 2018.

Chairman of the Alcohol Health Alliance Professor Frank Murray, said it was important that vested interests were not allowed to further delay the Bill.

He noted that it was 735 days since the legislation was first published by Taoiseach Leo Varadkar, who was then minister for health.

“Since then, 2,205 people have died as a result of alcohol-related accidents, injuries and illness. There will be too many empty chairs around the Christmas table in so many homes because of alcohol-related harm. It is time to reduce the hurt and stand up for public health.”

He noted the concessions made to small retailers on the separation of alcohol from other products to allow the Bill progress after a long delay.

“Alcohol sold in a small shop is equally harmful as that sold in larger outlets. A new statutory code for retailers is a positive move. Alcohol is a licensed product and not an everyday grocery so it should be displayed separately,” said Prof Murray.

But the Alcohol Beverage Federation of Ireland (ABFI) accused Mr Harris of introducing a “harmful and ineffective Bill”. While the federation said he took a “balanced approach to the issue of structural separation”, it called for the same approach on advertising and labelling proposals.

Mr Harris accepted amendments to the Bill which will mean health warnings including ingredients, calories and links to cancer will take up one third of the label on a bottle.

The Minister said it would not be an offence for a manufacturer not to place a label on an alcohol product but it would be an offence to sell alcohol without such a label.

The drinks federation said the cancer warning on alcohol products would be “devastating for drinks companies” and would impose additional costs on producers.

The federation’s director Patricia Callan said Mr Harris and the Department of Health “continue to ignore drinks businesses, as it pushes through legislation that will effectively stall and potentially reverse this growth, acting as a huge barrier to entry. This is at a time when the sector already faces major uncertainty, with Brexit negotiations ongoing.”

But Senator James Reilly, a GP and former minister for health, said the legislation was critical for future generations. “I fully accept that lobbyists have a legitimate right to lobby,” he said, but added the argument was not just about jobs. “It is not just about livelihoods, but about the lives of our citizens.”

Independent Senator Frances Black,an addiction campaigner and counsellor, claimed that lobbyists had succeeded in taking apart one of the four main measures of the Bill. “For the lobbyists it’s one down and three to go.” She said their intention was now to turn to advertising, labelling and pricing and she said she had already heard a lobbyist on radio talking about how health labels were going to ruin sales.

Small retailers also hit out at the Minister and Department of Health officials for the delay in the passage of the legislation, claiming they “stubbornly refused” to meet retailers to discuss the Bill.

The Bill, first introduced in the Seanad two years ago by Mr Varadkar was finally passed on Friday by the Upper House. It stalled in the Seanad over a year ago after Fine Gael Senators complained about the financial impact the proposals would have on small retailers to implement measures to structurally separate alcohol from other products.

A compromise agreed after consultations in the past month will allow alcohol be displayed in three storage units or placed behind a barricade up to 1.5 metres high as part of provisions of the Bill.

Chief executive of the Convenience Stores and Newsagents’ Association Vincent Jennings said “all of this was totally unnecessary”.

“The blame for the delay lies firmly at the feet of a department that had stubbornly refused to invite retailers to meet whilst they were contemplating the legislative path, a refusal that is at odds with Better Government guidelines and requirements for all departments conducting pre-legislative Regulatory Impact Assessments”.