Michael McDowell calls on Garda Commissioner to stand aside

Speaking in the Seanad, former Tánaiste and minister for justice Senator Michael McDowell has called on the Garda Commissioner Nóirín O’Sullivan to stand aside from her role ahead of a tribunal into the handling of garda whistleblowers. 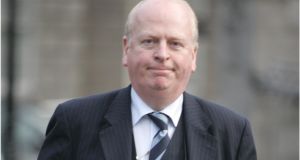 Former tánaiste Michael McDowell has called on Garda Commissioner Nóirín O’Sullivan to stand aside until a tribunal into the handling of garda whistleblowers is complete. Photograph: Dara Mac Dónaill.

Former tánaiste and minister for justice Senator Michael McDowell has called on Garda Commissioner Nóirín O’Sullivan to stand aside until a tribunal into the handling of garda whistleblowers is complete.

Mr McDowell said he wanted to say, “in the strongest possible terms’’, that there was no reason at all for the Government to commit to the commissioner remaining in office.

He told the Seanad on Thursday that Ms O’Sullivan should step aside “for the duration of the tribunal until it has reported, or permanently’’.

Mr McDowell said it was totally inconceivable that officers, including senior officers of a disciplined force, should be asked in public to accuse the person in charge of them of grave misbehaviour in evidence to a public inquiry.

He said it would be difficult for them to instruct counsel to cross-examine that person as to her honestly, reliability and suitability for office.

Mr McDowell said the public should not be judge and jury in the matter.

“However, the rights of all persons and the public to fairness come first,’’ he added. “The determination that the commissioner should remain in place during the tribunal is neither fair, nor appropriate nor defensible.”

Mr McDowell said the relationship between the Government and the commissioner must be based on confidence.

“Confidence in anyone’s language includes a solid belief that the person in question is truthful and reliable in every respect,’’ he added.

“Confidence cannot be said to exist if sufficient doubt exists in the mind of the Government in respect of the gravest allegations to warrant the establishment of a tribunal of inquiry.’’