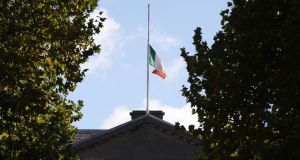 Flags fly at half mast at Leinster House in Dublin after the death of former taoiseach Liam Cosgrave. Photograph: Niall Carson /PA Wire. 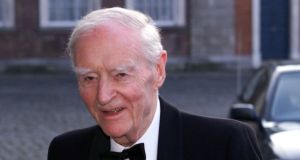 Liam Cosgrave was someone who devoted his life to public service, Taoiseach Leo Varadkar has told the Dáil. Photograph: Collins.

Liam Cosgrave was someone who devoted his life to public service, Taoiseach Leo Varadkar has told the Dáil.

“Today a grateful country thanks and honours him for always putting our nation first,” he said.

Opening expressions of sympathy after the death of the former Fine Gael taoiseach on Wednesday, Mr Varadkar said that throughout his life Mr Cosgrave had worked to protect and defend the democratic institutions of the State, and showed great courage and determination in doing so.

“He always believed in peaceful co-operation as the only way of achieving unity among the people on this island, and in the 1970s he celebrated that this country had embarked, in his own words, ‘on a new career of progress and development in the context of Europe, ’” the Taoiseach added.

“Born in 1920, in the middle of the War of Independence, Liam provided a powerful link back to the foundation of the State. His father, WT Cosgrave, helped create many of our institutions, and defended them when they were in jeopardy. His son shared the same values and approach to public life.”

He said Mr Cosgrave had in 1970 shown his courage and determination to get at the truth in the Dáil chamber, when as leader of the opposition he pressed the then taoiseach about the plot to import arms illegally after receiving information from a trusted source.

“His action and that of the then taoiseach, Jack Lynch, has been credited with saving the security forces of the State from becoming embroiled in a crisis in Northern Ireland, and has been called by some a great public service, and by others his finest hour,” he added.

Fianna Fáil leader Micheál Martin said Mr Cosgrave “deserves a place of honour in our history”. His abilities as a platform speaker focused mainly on Fianna Fáil of whom he was a “robust opponent”.

However, Mr Martin said: “I have no hesitation in saying that Liam Cosgrave was a man who gave so much to Irish political life and deserves a place of honour in our history”.

He said everyone should particularly value Mr Cosgrave’s contribution as minister for external affairs.

“Ireland’s unique contribution to the United Nations and the exceptional international standing in which our country is held by so many others began to be constructed because of Liam Cosgrave’s leadership at that time,” Mr Martin said.

Sinn Féin leader Gerry Adams extended his sympathies and those of his party to the family of Mr Cosgrave.

“He was for many people during turbulent and controversial periods of our history a controversial and divisive figure but today is not the day to analyse this.”

Mr Adams said he did not know Mr Cosgrave personally but did see him at many of the 1916 centenary events and at other events over the years and in Croke Park on many occasions.

“He had a long career in this Dáil and he had a great privilege of serving as a TD for nearly 40 years representing the people of Dún Laoghaire and Dublin county.”

Mr Howlin said “he was a patriot whose primary focus was the defence of the institutions of this new born State. Those institutions were under direct and violent attack from the IRA of the time.”

The Labour leader added that “we are in an age now where personality sometimes trumps substance, but Liam Cosgrave was a man of substance. He had a clear of his country, of his religion and of his politics. “

People Before Profit TD Richard Boyd Barrett said that as somebody “who lived all my life in Dún Laoghaire you could not but be familiar with the family name, a name synonymous with the politics of Dún Laoghaire”.

“I would not adhere to what I see as the very conservative, Catholic viewpoint political and social of Liam Cosgrave as I am very much at the other end of the political spectrum,” he said.

Mr Boyd Barrett added: “He had a great belief in public service, that is something to be commended.”