Like the Ireland of his time, Cosgrave’s achievements were a function of his limitations 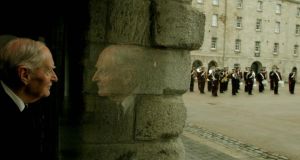 Conor Cruise O’Brien told me a story about the time in 1956 when he was head of the United Nations section of the Department of External Affairs.

The State had only recently been admitted to the UN, and was emerging from a long period of international isolation during and after the second World War.

Liam Cosgrave, still only in his mid-30s, had become minister for external affairs in the interparty government. The Arab-Israeli conflict was one of the key issues for the UN. O’Brien drafted a speech about the issue for Cosgrave to deliver to the General Assembly. He discussed it with the minister and with Ireland’s permanent representative at the UN, Frederick Boland.

Cosgrave suggested to Boland that just one change be made in the draft: the addition of the line: “I appeal to the Jews and the Muslims to settle their differences in accordance with Christian principles.”

O’Brien pointed out to him that this was likely to impress neither Jews nor Muslims. Boland turned to Cosgrave and said: “Conor seems to think it won’t go down all that well in the Middle East.” Cosgrave smiled enigmatically. Boland turned to O’Brien and said: “It may not go down well in the Middle East, but the minister seems to think it will go down well in Dún Laoghaire Rathdown”, referring to Cosgrave’s constituency.

The words in question did not make it into the final draft of the speech, but O’Brien’s point was that Cosgrave did not think of himself as a great visionary.

Nor could he ever have been accused of trading on his charisma.

Eamon Morrissey’s satiric TV depiction of him as the Minister for Hardship – dour, dismal and doggedly bleak – was all too recognisable. Even when he was taoiseach (1973-77), he was overshadowed by more interesting, intellectually ambitious and colourful personalities in his own cabinet: Cruise O’Brien himself, Garret FitzGerald, Justin Keating. He could not even match the low-key, homespun charm of his ultimate political nemesis, Jack Lynch.

His dynastic credentials were indeed crucial – it is hard to imagine him as a natural politician, still less a highly successful one, if he had not been born into the trade.

But the family connection resonated because, in almost eerie ways, his career was defined by the same forces that had shaped his father’s: the need above all to preserve the State in times when its legitimacy was being violently challenged.

Like the State he embodied, Cosgrave’s achievements were a function of his limitations. His weaknesses and his strengths were contained in the same word: stability. He was conservative, even reactionary – he was, after all, the taoiseach who bizarrely voted against his own government on a Bill that attempted a minimal liberalisation of access to contraception.

The State he wished to stabilise was always a narrowly Catholic, socially cautious domain. As a rhetorician, he came alive only when he was snarling viciously at perceived traitors and subversives: the internal Fine Gael critics he denounced as “mongrel foxes” he threatened to “dig out” and throw to the pack, or the unnamed “blow-ins” (assumed to be the foreign-born Kadar Asmal and/or Bruce Arnold) he threatened to “blow up”. Tolerance, openness and inclusivity were not words anyone ever used about him.

Cosgrave was one of those figures who, in the name of the stability of the State, was prepared to see some of its institutions undermined. He tolerated the existence and activities of the so-called “heavy gang” within the Garda, with severe long-term consequences for Irish policing.

He essentially backed his bullish defence minister Paddy Donegan when Donegan launched a disgraceful attack on the president, Cearbhall Ó Dálaigh, merely because Ó Dálaigh exercised his constitutional function of referring anti-terrorist legislation to the Supreme Court. It sometimes seemed that, for Cosgrave, democracy had to be curtailed in order to defend it.

Yet if constricted notions of stability were Cosgrave’s greatest inadequacy, his narrow sense of purpose was also a source of strength. On a personal level, it allowed him to hold together a government of strong personalities.

Given the challenges posed by the aftermath of the 1973 oil crisis, the continuing violence of the Troubles and the deepening divisions between social conservatives and liberals, Cosgrave’s government was remarkably steady.

It would have lasted a full term – and perhaps have stood a better chance of re-election – had he not misjudged the timing of the 1977 election.

Cosgrave’s dogged sense of duty and muted ego meant he was a conservative who presided over a relatively progressive government, which invested in social housing, expanded welfare benefits and imposed wealth taxes.

He did whatever was necessary to keep his Labour partners – and the social democratic wing of Fine Gael – on board, even if those measures went against his natural instincts.

And the fact is that the State did see off the challenge of the Provisional IRA. As the man who did the State some service in 1972 in pushing Lynch to take action against those in his government who were allegedly colluding in the importing of arms for the IRA, Cosgrave played a big part in the ending of official ambivalence about their campaign. His narrow-mindedness was also, at a key moment in modern Irish history, a powerful lack of ambiguity.

Cosgrave had no obvious thoughts on the need for radical changes of mentality if the conflict was ever to be resolved. But in truth there was probably little room for any opening to the IRA, which had settled down into its “long war”, or to the loyalist terror gangs who destroyed Sunningdale.

After the success of the Ulster Workers’ Council strike of 1974 in bringing down the powersharing executive, there was little appetite for visionary solutions, even if Cosgrave had gone against his lifelong habits and proposed them.

In 1986, Cruise O’Brien summed up Cosgrave’s achievements and limitations as taoiseach astutely: “Cosgrave’s strength and the limiting factor on his strength was his very strong emotional attachment to the institutions of this State, and his hostility to anything that might overthrow or damage them.

“When things were under pressure he knew what he wanted to do . . . but his concept of the institutions of the State was that he would hand them on just as he had inherited them. It was a limited, traditional, honourable way of looking at things, and I think for the times that were in it, it was quite a useful one.”

Cosgrave’s very long life after his retirement from politics was remarkable for its dignity, self-effacement and obvious commitment to the notion that those who have left the stage should not comment on the play.

The dourness now seemed more like modesty, the lack of charisma more like an old-fashioned decorum. If he impinged at all on public consciousness, it was as a figure from a long-forgotten political culture.

Which, indeed, he was.