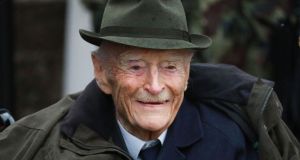 ‘He was always a very kind man. He was respectful,’ Bertie Ahern said of Liam Cosgrave. Photograph Nick Bradshaw

Public figures including the president, former taoisigh and party leaders have expressed their condolences at the death of former taoiseach Liam Cosgrave at the age of 97 .

“Liam Cosgrave was someone who devoted his life to public service; a grateful country thanks and honours him for that and for always putting the nation first.”

“Liam Cosgrave will be remembered not only as an effective cabinet minister but as a taoiseach with the capacity to win and secure the stability of a multi-party coalition.

“Liam Cosgrave was committed to serving the people of Ireland with all of his energy, intellect as well as passion. In retirement, he loved to be among the people, be it at State occasions or sporting events and it is fitting that we pay tribute to his significant contribution to Ireland.

“Liam Cosgrave’s most striking quality was his unshakeable conviction, whether to his deep Catholic faith, or to preserving the democratic integrity and security of the State.

“He was a man of great loyalty, old fashioned courtesy, personal warmth and always had a great sense of humour.

“He was kind and encouraging to me as a young TD, and always available for advice - but only when it was wanted. One of my most touching memories was the phone call from him on the night of my election as taoiseach in 2011: ‘You have made an old man very happy,’ he said to me. It was a very proud moment for me.”

“He was always a very kind man. He was respectful.

“He had a long and successful life. It was an amazing, long and very good life.

“He wasn’t one for turning, He believed what he believed. He was not going to be swayed by a speech or by reading an article. I admired that.”

“I was struck by his wonderful natural warmth.

“He had his funny side. He was incredibly mischievous and played up to his face. He would look very serious and then would suddenly break into a grin.

“We were lucky to have had a leader so steadfast and honourable.”

“He led Fine Gael for twelve years from 1965 to 1977 – the last four of them as Taoiseach. With the Troubles in Northern Ireland erupting during that time these were amongst the most turbulent years in our history as an independent state. Throughout all those years he showed real grit, resilience and determination both in opposition and in government.

“I had the privilege of meeting Liam Cosgrave myself on many occasions with his daughter Mary, and he really was a gentleman to his fingertips; a true patriot.”

Archbishop of Armagh and Catholic Primate of All Ireland Eamon Martin

“Liam Cosgrave was admired by people the length and breadth of Ireland as a wise, modest and kind man of great integrity.”

“We mourn the passing of one of Ireland’s greatest leaders, Liam Cosgrave. He was a brave and intelligent leader who always put the country’s interest first.”