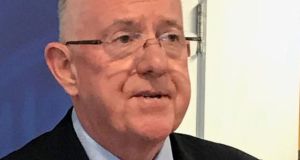 Minister for Justice Charlie Flanagan said the Judicial Appointments Commission Bill would be delayed at least into the autumn. Photograph: Aoife Moore/PA Wire

Controversial legislation on judicial appointments finally moved on to the next stage after a marathon debate of more than 100 hours came to an unexpected end in the Seanad.

However, Minister for Justice Charlie Flanagan said the legislation “does need a substantial amount of work” and it will be delayed at least into the autumn.

Mr Flanagan said the Government would reflect on the status of the Judicial Appointments Commission Bill over the summer months. The legislation, which covers the process of appointing judges, has been the subject of one of the longest filibusters in living memory.

Mr Flanagan said he did not anticipate taking report stage immediately on the resumption of the Seanad in September but said he would like to pass the Bill “in its entirely during the course of the autumn”.

Some 25 amendments were moved and withdrawn from the Bill allowing the committee stage debate to be passed before the summer recess. They included five from Labour senator Ivana Bacik, who said she would like the opportunity to refine and improve them for the report stage debate.

Mr Flanagan told senators he was satisfied with the constitutionality of the Bill “but it should also legally robust and practically workable” and he believed they needed to through the Bill with a “fine-tooth comb”.

Mr Flanagan signalled his interest in engaging with opposition senators to discuss amendments and provisions which he believed could improve the legislation, citing as “sensible” a number of Opposition amendments including one from Independent senator Michael McDowell that judges who were retiring with outstanding judgments still to be made, should be deemed to be still in office pending the completion of their judgments.

Mr McDowell, who has led the filibuster on the Bill, was not in the Seanad and Independent senator David Norris said he had been “delayed on very important business in the courts. He could not be here unfortunately.”

Mr Norris and Senator Victor Boyhan moved but then withdrew a number of amendments on his behalf. This allows them to be resubmitted at the later report stage debate.

Mr Flanagan said the move underlined the status of Mr McDowell’s “underlings”. When Senator Bacik suggested the remark was uncalled for he described the Independent senators as “passengers” while the driver was absent.

Independent senator Gerard Craughwell said that “as a passenger I got into the car of my own free will” and suggested they might still be dealing with report stage of the Bill in 2020.

Senator Bacik said that the real driver of the legislation was Minister for Transport Shane Ross and that all Government Ministers were passengers on this legislation.

Mr Ross has championed the Bill and it is a commitment in the Government’s programme for government.

The Bill was passed by the Dáil a year after it was introduced but has been in the Seanad since June last year.

Mr Ross said he wanted to take decisions on judicial appointments out of the hands of the judiciary and politicians, and transfer it to a new independent appointments commissions, comprising judges, legal professionals and lay people.

Mr Ross has argued for a lay majority, a change that has been fiercely resisted by lawyers.