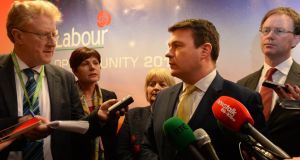 Minister for the Environment and deputy leader Alan Kelly says Labour will run as an independent party at the next general election, with its own policies. Photograph: Cyril Byrne /The Irish Times

Labour is very different from Fine Gael, Minister for the Environment and deputy leader Alan Kelly has said.

“I would not like to have seen a government over the past four years which did not have the Labour party in it,’’ he added.

Mr Kelly said Labour would run as an independent party at the next general election, with its own policies.

However, there was, in electoral terms, “a natural inclination’’ on the part of Labour and Fine Gael supporters to transfer to one another, given they had come through so much as a government, he added

Mr Kelly, who was speaking to journalists as his party’s annual conference got underway in Killarney, Co Kerry, said it would be natural to have discussions between the two parties on a voting pact in advance of the election.

Mr Kelly distanced himself from the suggestion by Fine Gael Minister for Finance Michael Noonan that a Fine Gael-Labour alliance could receive the support of like-minded Independents to form a government after the next general election.

“I believe it is too early for such speculation, given that we are 14 months out from an election,’’ he said.

“This Government will go full-term and I believe the country would be best served by returning it.’’

Mr Kelly said while such speculation was good for the media, he did not indulge in it because it was not practical and 14 months from an election was an eternity.

He said people would have a choice at the next election between stability and chaos and he would urge them to choose stability by returning the Government.

He said he had spoken to Wicklow TD Anne Ferris “on a couple of occasions’’ since she lost the party whip after voting for Independent TD Clare’s Daly’s Bill allowing for terminations in cases of fatal foetal abnormality.

“We will speak to Anne again,’’ he added. “It was a very difficult situation for her and I appreciate that.’’

Mr Kelly said there were many genuine people protesting against water charges, but a small number wanted a Utopian society where there was everything for nothing.

“That society does not exist ,’’ he added. “These people are false revolutionaries who believe in leading people up to the top of the hill and then blatantly abandoning them.’’

There is a strong Garda presence at the conference in anticipation of a protest against the water charges. Tánaiste and party leader Joan Burton will give her keynote address to delegates on Saturday night.