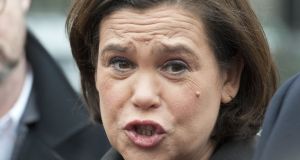 The public does not trust judges to deliver appropriate punishments for sexual crimes, Sinn Féin deputy leader Mary Lou McDonald has claimed in the Dáil.

The Dublin Central TD said that a “recent high profile case has brought the Judiciary into disrepute”.

Ms McDonald called for the introduction of a sentencing council to include representatives of the public as well as the Judiciary, for the implementation of consistent and appropriate sentencing.

But Tánaiste France Fitzgerald said the law in relation to the sentencing regime for sexual crimes had been greatly strengthened in recent years.

Criminal Law Sexual Offences Act there was now a “much stronger sanctions in relation to any sort of online grooming” and the Act introduced a specific offence of using information and communications technology to facilitate the sexual exploitation of a child.

“The reality is our criminal law is now very strong in relation to sanctions,” Ms Fitzgerald said.

She added that the Judicial Council Bill provided for the establishment of a sentencing information committee, to collate information on sentences imposed by the courts.

Ms McDonald, in an apparent reference to the case of former Irish Times journalist Tom Humphries, criticised the leniency of the sentence.

But Leas Cheann Comhairle Pat “The Cope” Gallagher intervened to remind her that under the standing orders of the Dáil, the House was not a judicial body and could not review or discuss court decisions or judgments.

When Ms McDonald continued to speak about the case Mr Gallagher warned her that she should be “general” in her comments.

The Sinn Féin deputy leader said victims of such crime “are left physically emotionally and mentally sick. Their childhoods are taken and despite the horrific nature of these crimes perpetrators receive very light sentences”.

She said “a recent high profile case has brought the judiciary into disrepute,” and added that “the public doesn’t trust the judicial system to deliver punishments to fit these crimes”.

Ms McDonald added: “These aren’t isolated cases. There is a very real problem with the sentences of perpetrators of rape and sexual abuse.”

And she said “Inconsistency, leniency and light sentences are common practice.”

This was a very grave deficiency within the system, she added.

Ms McDonald said a mechanism was needed to provide guidelines to ensure the Judiciary stuck to the range of sentencing provided for the category of offences. It would ensure consistency and accountability across the court system.”

The Leas Cheann Comhairle intervened again and told her that it was a long-standing ruling of the House that members of the Judiciary were independent in their function under the Constitution and could neither be criticised nor have their rulings referred to in the House.

Ms McDonald said everyone in the House appreciated the independence of the Judiciary and the separation of powers.

“I haven’t advanced any argument for mandatory sentences for that very reason.” But she added it was TD’s job to reflect the public scrutiny of high profile cases and to propose a framework in which the Judiciary might operate.

She said she was “affording guidance, not direction, guidance to the bench” on a “mechanism that would add public confidence that has been dented”.

The Tánaiste said there had been a long history in Ireland and elsewhere of a belief that sentencing did not reflect the seriousness of the crime, but the Government took sexual crime extremely seriously.

She said there needed to be a sea change in attitude to victims and that was why the Government had introduced and implemented the Victims of Crime Act.

The sentencing information committee, to be established under the Judicial Council Bill “would be a very valuable tool for the Judiciary and for the public’s understanding of sentencing regimes”.