Familicide submission from Hawe family would be ‘really welcome’ 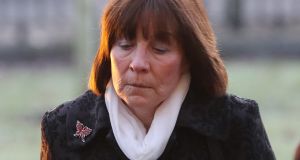 The Minister for Justice would “really welcome” a submission from the family of late Co Cavan woman Clodagh Hawe on their ideas for dealing with familicide cases, the Taoiseach has told the Dáil.

Ms Hawe and her three sons were murdered by her husband Alan Hawe, who then also killed himself, in August 2016 in Ballyjamesduff, Co Cavan. The family has called for a full inquiry to establish why they were killed and to highlight the lack of information and supports in such cases.

Mr Martin said the family had said it was too easy for the authorities to “throw a blanket of silence over such cases”, to treat them as a result of depression and to close them down.

He got a sense from the interviews that there had not been a co-ordinated, multidisciplinary approach to the case. He asked for the State to commission research into familicide in Ireland, which appeared to be more frequent in recent years.

Ms McDonald called for the Government to follow the example of Britain and Northern Ireland and establish domestic homicide reviews on a multiagency basis.

Ms McDonald said such reviews, established on a statutory basis, have been in place in Britain since 2011 and would be established in the North following public consultation.

She said Women’s Aid had advocated for such reviews, which would include the evidence of families and friends.

She called on the Government to take up the request of the family and carry out a full and new inquiry into the killing of Ms Hawe and her children.

Mr Varadkar said what happened was horrific and had to be beyond everyone’s worst nightmare.

He said more had to be done but that Garda reforms were under way. He cited the implementation of the Domestic Violence Act, noting that a new offence of coercive control was now in place.

The Coroners Act and the Succession Acts were under review, but Mr Varadkar said there would be a difficulty with the family’s request for the book of evidence in such cases to be published. People give evidence on the basis that it is privileged, and might be reluctant to give evidence if it was to be published, he noted.

The Government will talk to the National Suicide Prevention Office, whose budget had been doubled, about research into domestic violence, the Taoiseach added.

He did not want to make commitments on the floor of the House, but reiterated comments by Minister for Justice Charlie Flanagan that he would like to receive a submission from the family, including other ideas they may not have brought forward in the interview, and that this could be a first step.