Danny Healy-Rae: Eating a full meal could be as dangerous as drink-driving

During a Joint Oireachtas Committee on Transport, Tourism and Sport on Wednesday (May 17th) Independent TD Danny Healy-Rae described eating a full meal as being as dangerous as a person who consumes alcohol and drives. Video: Oireachtas TV 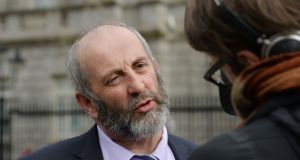 Danny Healy-Rae TD , who is also a publican, has said in the past that drivers who had consumed alcohol were automatically blamed for collisions. Photograph: Alan Betson

Taking to the wheel after a full meal could be as dangerous as driving following the consumption of alcohol, Independent TD Danny Healy-Rae has said.

He made the comment during a sitting of the Joint Oireachtas Committee on Transport, Tourism and Sport on Wednesday.

The committee were considering a measure, proposed in the Road Traffic (Fixed Penalty-Drink Driving) Bill 2017, that anyone caught driving with a blood alcohol level of 51-80mg of alcohol per 100ml of blood should lose their licence automatically for three months.

The proposal comes on foot of research and analysis by the RSA of Garda forensic crash data, which the RSA presented in a report, Alcohol as a Factor in Fatal Collisions 2008-2012.

Mr Healy-Rae made his controversial comments when asking what other factors were causes in crashes.

Responding to the question, CEO of the Road Safety Authority, Moyagh Murdock, said: “The scientific evidence is unequivocal, that any amount of alcohol impairs driving. Therefore we can conclude, that of the 35 people who were killed by drivers who had consumed alcohol between 20 and 80, that alcohol was a contributory factor to those collisions.”

However, Mr Healy-Rae disputed the answer. He said that there were other contributory factors that cause crashes such as eating too much.

“Can I say to you, and many people will agree with me. If you eat too much and get in behind the wheel of a car, then you’re a danger on the road because you are likely to fall asleep after eating a big meal.

“I for one, anyway, when I go home late this evening, when I know that, I don’t eat going in behind the wheel because I know what it will do.”

The TD said there were many other “over-riding” reasons that cause accidents.

Mr Healy-Rae, who is also a publican, has said in the past that drivers who had consumed alcohol were automatically blamed for collisions.

“If some poor unfortunate person who drank four or five pints walked home, fell out in front of a car, and was lying in the road when the car came along, and that driver had a pint or a pint-and-a-half, he will be blamed for that fatality.